The S90 T8 hybrid will provide low running costs, but you need to keep the battery charged up to make the most of it

The S90 T8 Twin Engine plug-in hybrid is the economy champion on paper, although its company car costs will be more attractive thanks to a quoted emissions figure of 44-61g/km. Claimed WLTP economy of up to 148.7mpg is quoted, although how close you come to that figure will be entirely dependent on how often you plug the car in to charge up the battery. Fail to do so, and you can expect fuel economy from the petrol engine to come in at around 35-40mpg.

Although at its best cruising on long, straight motorway sections, the S90 T8 offers up to 37 miles of pure electric running, which means it's also cut out for making shorter journeys at very little cost. With the average UK commute being around 23 miles, the T8's plug-in hybrid powertrain could save you a chunk of money.

Further boosting fuel efficiency, the S90 features a stop/start system and adaptive cruise control, while there's an Eco drive mode which ensures the stop/start function is permanently activated and the power to climate control settings is reduced. There's also an 'eco-meter' display that indicates in real time how efficient your driving style is. 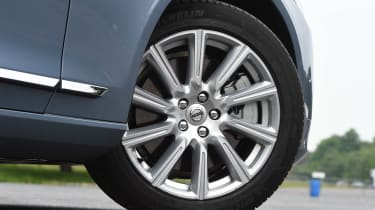 The S90’s insurance groups are broad, with the D4, T4 and T5 engines starting in group 27 and the more potent D5 in Group 33. Go for the T8 Twin Engine jumps to Group 42, reflecting its higher performance as well as its more complex drive system, which is likely to be more costly to repair.

Even these group ratings look pretty appealing within the executive saloon class. The BMW 520d sits in group 34 in basic SE trim, and that rises to group 36 if you take the popular route of moving up to the M Sport edition.

The overall view, therefore, is that the S90 is a competitive option on insurance costs.

Volvo has reasonably modest sales targets for the S90, so oversupply is unlikely. We’d expect depreciation to be in the same ballpark as the car’s rivals from BMW and Audi; indeed, the predicted three-year, 36,000-mile retained value for the D4 Inscription we had in on test was a solid 48 per cent - or a good five per cent more than the comparable Mercedes E-Class. In fact no model drops below the 40 per cent mark in terms of depreciation, and even the T8 plug-in has figures of around 43 per cent.