Boot isn't the biggest in the class, but capable enough for most needs; rear seats can feel a little hemmed in

In raw terms, the S90 is a big enough car for four adults and their luggage - although they won’t all be able to bring a full-sized suitcase unless some of the hand luggage ends up between the two rear passengers.

That’s not out of kilter with the rest of the class, though, and the S90 acquits itself fairly well for cabin storage and passenger accommodation. Boot capacity is 500 litres - which is enough for most everyday uses, and capable of swallowing a couple of large suitcases and accompanying overnight bags. Some rivals, like the Mercedes E-Class, offer larger load bays, though. 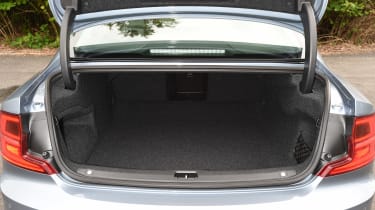 Volvo has at least managed to pack in some useful storage space in the cabin. There’s a large glovebox and a big tray between the two front seats, plus bottle holders in each door than can each cope with a 1.5-litre container.

The S90’s wheelbase is 2,941mm - which is basically the same as the Merc’s and nearly 30mm longer than the Audi’s, but almost three centimetres shorter than the BMW’s.

Four adults won’t complain about the accommodation in the S90’s cabin. There’s as much space in here as in an E-Class, basically, which is pretty generous; indeed, the Volvo’s back seats are particularly spacious, with a clever design of front seat back freeing up leg and kneeroom for rear passengers.

The cabin atmosphere is a slightly different matter, though; front passengers will feel it’s airy enough, but despite the amount of space around them, those in the rear may think it’s a bit hemmed in. That’s because the roofline is that little bit lower than in the car’s rivals - and even if you opt for the panoramic glass roof, it doesn’t extend as far as it might, so it doesn’t transform the cabin by bathing it in light. 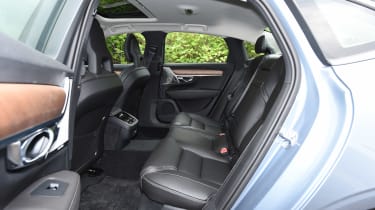 Volvo offers two Isofix points in the outermost rear seats on the S90. They’re easy to access, too, with plastic tabs that are simple to remove or flip up; you won’t have to worry about your seat’s fixing points snagging the S90’s leather as you try to slide it into place.

The S90’s boot is not the largest in the class, at 500 litres, but it’s still large enough for two large suitcases and accompanying hand luggage. There’s a bit of underfloor storage on offer too.

The rear seats fold down in a 40:20:40 split, and the process can be controlled by a button near the headrests, so it’s pretty easy to use. The seats don’t fold down completely flat, but it’s worth remembering that some rivals like the E-Class only offer the split folding seat as a cost option; it’s standard on the S90.

Trying to load heavy items into the S90’s boot isn’t going to be pretty; the aperture is a reasonable shape, but a world away from hatchback accessibility, and there’s a fairly hefty step that you have to hoick your clutter over.