Audi’s A4 Allroad returns in a new generation, but is it worth choosing over a ‘proper’ SUV? 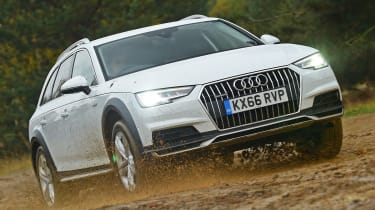 If you’re not interested in the look, high driving position and image of a full-fat SUV but need help through the UK’s notoriously unpredictable winter, the A4 Allroad is highly recommendable. This diesel is also the pick of the range, with reasonable running costs and all the performance you’d need. It’s £5,000 more expensive than a similarly-specced A4 Avant, however, so it's best to question if you actually need the extra capabilities before splashing out.

Just in time for the unpredictable British winter to sabotage many commutes, Audi’s second-generation A4 Allroad has arrived in UK showrooms. With the new Q5 still several months away, we’re driving the jacked-up estate to see if buyers are better off waiting for the true SUV to arrive.

It’s easy to think of the A4 Allroad as a compromised ‘halfway-house’ between the standard A4 and more expensive Q5, yet the appeal of the rugged estate is greater than ever. Nowadays, many SUVs are more focused on style and performance than they are rough and rugged. Despite sharing much of the same hardware, the Allroad is cheaper to buy, faster and more frugal than the Q5. 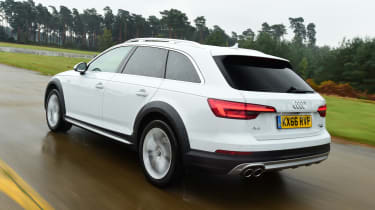 The exterior treatment for the A4 Allroad is subtle yet effective. You’ll find plastic body cladding on the wheelarches, sills, roof rails, as well as metallic skidplates front and rear. The Allroad also sits 34mm higher than a standard A4 Avant, chiefly due to the 23mm of extra suspension travel and chunkier profile tyres. That’s just 20mm less than the outgoing Q5. It’s hardly a radical revolution over the old A4 Allroad, yet we’d argue the formula wasn’t one that needed changing.

More reviews for A4 Allroad

Our test car is effectively the base model – powered by a 187bhp 2.0-litre TDI and seven-speed DSG automatic gearbox. It’s expected to be the biggest seller, and it’s easy to see why. Unlike the lacklustre 2.0-litre petrol we first tried on European roads, the relaxing torque delivery of the diesel is more suited to the Allroad’s character on the road.

As always, the dual-clutch ‘box slurs shifts nicely, and it’s nicely refined for a four-cylinder. On the motorway, the Allroad softens bumps and otherwise harsh expansion gaps with aplomb, with less of the wind noise that blights bigger SUVs.

The drawback, of course, is how the A4 Allroad handles in the bends. In auto mode there’s noticeably more lean in corners than in a standard Avant – and while you can dial some of that out by sticking the Drive Select into dynamic, it makes the ride a bit choppy. It’s no BMW 3 Series, but that’s to be expected given the raised ride height. 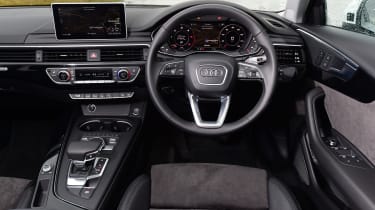 While the 2.0-litre petrol uses Audi’s new ‘quattro with ultra’ part-time all-wheel drive system, the diesels currently still use the permanent setup. That’s expected to change some time next year, but the old-tech system still works really well, offering plenty of grip when required and rarely bogging down off-road. There’s no doubt the Allroad, in whatever guise, offers as much mud-plugging capability as most SUV owners would ever require.

The interior is completely identical to a similarly-specced Avant, with the exception of the Off-Road mode in the Drive Select display. Some may bemoan the lack of rugged identity or even any badging to mark it out, but for most buyers that won’t be a problem. The A4’s cabin remains one of the finest of any car on sale, with first class materials forming an intuitive design with plenty of slick technology.

Unsurprisingly it’s no less practical than the Avant, either. There’s plenty of leg and headroom for front and rear occupants, as well as a decently-shaped 505-litre boot and an incredibly easy seat folding mechanism.