Audi's updated RS 3 has spawned this new Saloon model, which is fast, capable and practical all in one package

A BMW M2 is sharper to drive and a Ford Focus RS better value for money, but the RS 3 remains a thoroughly capable and well-resolved package that blends pace, poise and practicality in equal measure. While this new Saloon is destined to sell big mainly in the US and China, it’s a welcome and handsome addition to the range.

How much horsepower can you cram into a family hatchback? The original Audi RS 3 launched in 2011 with a punchy 335bhp, only to be trumped by the current car four years later, when it upped the ante with a whopping 362bhp.

However, at the same time Mercedes’ engineers were busy readying a more powerful Merc-AMG A45, which launched in the same year with an absurd 376bhp. Not to be outdone, Audi has responded with this: a lighter, faster and more powerful RS 3 for 2017.

From launch in the summer, buyers will be offered a choice of two bodystyles. It’s available as a conventional five-door Sportback as before, while a sleeker four-door saloon will join the line-up for the first time.

With 395bhp, it packs 19bhp more than the Merc, and consequently is quicker off the line. Audi claims 0-62mph in 4.1 seconds, which is two tenths faster than the outgoing RS 3, and one tenth quicker than the Merc.

With a new aluminium crank case, aluminium oil pump, lightweight pulleys and a magnesium upper oil pan, the new five-cylinder RS 3 is 26kg lighter than its predecessor. Engineers have also widened the track front and rear and firmed up the suspension for tighter body control.

The result is a C-segment saloon (or indeed hatch) that pulls violently from very low revs, only really getting bogged down if you ask it for full throttle below 1,500rpm. The seven-speed dual-clutch gearbox is as smooth as ever, linking cogs seamlessly in the blink of an eye. 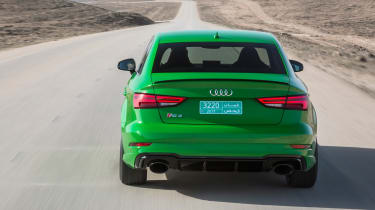 Our car’s optional sports exhaust allowed us to increase the volume, though even the standard system features variable valves that open in Dynamic mode for a more vocal sound. The noise quickly becomes addictive, while producing violent pops and bangs on the overrun, too.

The dusty roads of Oman caused the car to shimmy across the hot tarmac, but in the wet and windy UK we expect the venerable quattro all-wheel-drive system to offer the same reassuring grip as the old car. It can now send up to 100 per cent of its power to the rear wheels, though, which when combined with the recalibrated ESP system makes it feel more playful. A BMW M2 is still more rewarding behind the wheel, but we reckon it’d struggle to keep up with the Audi over an undulating and broken British B-road.

The steering offers decent weight and a reasonable degree of accuracy, but the car will still push wide if you force it into a bend with too much haste. That said, body control is excellent, without a hint of roll on longer, sweeping turns. Our car’s carbon ceramic brakes were a little grabby to begin with, but relayed immense stopping power time after time. 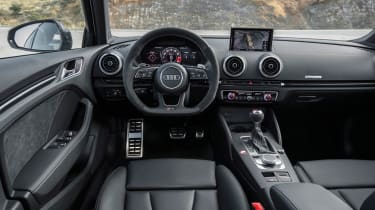 Of course, the beauty of the old RS 3 was its ability to fit into your life without the compromises of a pure-bred sports car. This new Saloon version offers almost all the performance of a TT RS, but with usable back seats and a 390-litre boot. High speed refinement is just as it should be in any Audi, with a high-quality and well insulated interior – though the 19-inch wheels are likely to kick up some road noise on our notoriously ill-surfaced motorways.

Where the RS 3 starts to fall down is when you look at how much it’ll cost you to buy and run. Prices haven’t been announced, but insiders reckon this Saloon could cost as much as £45,000. Even if you look at buying this car on one of Audi’s monthly PCP or contract hire plans, that’s a big jump over the outgoing car, which started at less than £40k. With publicised fuel economy of 34mpg you’ll be paying more at the pumps than you would in the Mercedes (40.9mpg), which uses a more frugal 2.0-litre four-cylinder turbo. 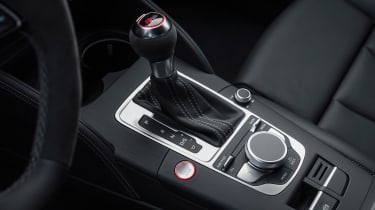 But as the standard A3 range was updated last year, the RS 3 benefits from all the same nips and tucks – with new lights front and rear. It gets the same front bumper as the Sportback model, as well as identical oval exhaust pipes.

Inside, the leather and Alcantara-trimmed cabin is an exquisitely finished piece of design. The layout alone has the Mercedes AMG-A 45 licked, while the cheaper Ford Focus RS can’t come close. Audi’s Virtual Cockpit dials are standard, while the classy air-con and infotainment controls are intuitive to use and fall perfectly to hand. 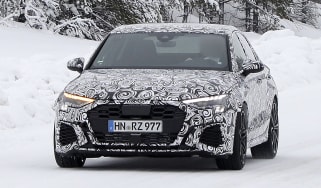 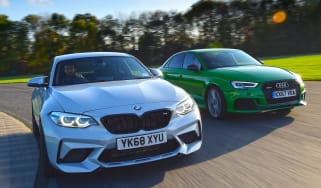