We get to grips with the new 503bhp BMW M3 Competition in prototype form, while also trying out the new BMW M4 Competition 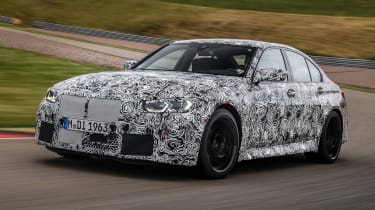 The BMW M3 remains a driver’s car of excellent quality. BMW has sensitively and thoughtfully applied new technology to the M3 throughout its generations, without ever going overboard. These new cars continue that trend, while also blending comfort with their explosive performance.

Familiar and immediately grin inducing - that’s exactly how the first few corners in the new BMW M3 feel, and while that’s precisely what we’ve come to expect over five generations of Munich’s performance saloon icon, M Division’s engineers have once again been able to add just a little bit more to the recipe. This is despite the prototype we’re driving - alongside a similarly near-finished M4 - being only 90 per cent complete, according to BMW M Development Manager Dirk Häcker.

Under the bonnet, a familiar tale is played out in the form of 3.0-litre, turbocharged straight-six power. But this engine is new. It’s the S58 used in the latest X3 M and X4 M SUVs, but its proper home is right here in the M3, where it plays out its typical, high-revving BMW M characteristics to the fullest. In the normal M3 it develops 473bhp, while the new M3 Competition - likely the only model we’ll get in Britain - steps things up to 503bhp.

A six-speed manual gearbox is found on the standard cars, while Competition variants are equipped with an eight-speed automatic, not reliant on dual-clutch technology but instead using torque converter tech. That’s unconventional in modern performance cars.

Häcker cannot reveal complete details about the chassis work just yet, but teases some of the changes. Compared with the regular 3 Series, the M3 gains a stiffer front axle, new electronically controlled dampers, and a reworked locking rear differential. 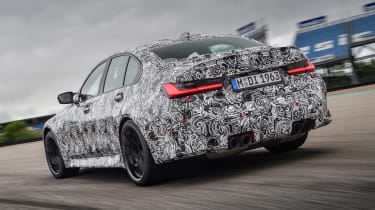 On base M3 and M4 models, the wheels are 18-inches at the front and 19-inches at the rear, growing to 19 and 20-inches respectively on Competition models and shod on Michelin Pilot Sport 4S rubber. Naturally, carbon ceramic brakes are optional. Both our M4 and M3 Competition prototypes are rear wheel drive. The oft rumoured four-wheel drive version? "An M xDrive is coming, but only later," says Häcker.

Our time with the cars is short, but enough to get under the skin of both. The M4 is up first, and the first thing you notice, compared with the last M4 and 4 Series, is the seating position - it’s much lower than before, and feels more purposeful. We set everything to Sport Plus, but the first thing that springs out isn’t oversteer, but turn-in. It feels like the front axle is shod with slicks, and the nose of the car is far more aggressive and keen to fire into the apex than before.

The engine is a known quantity from our experience of it in the X3 and X4 M, and here the linearity of response and climb to its 7,200rpm is all the more enticing, with a proper six-speed manual gearbox only adding to the sensation. Gentle oversteer is easily controllable, and while BMW has not confirmed a weight for the M4, it certainly feels lighter than before.

The M3 will probably be around 100kg heavier than the M4, but here - in Competition spec, mind you - the sensations it delivers are extremely similar, with no trace of additional weight detectable on turn in. The gearbox is the most interesting aspect though. While the slick shifting six-speed manual delivers maximum engagement, the eight-speed torque converter automatic is not a flop, with wonderfully rapid fire upshifts with seemingly no loss of drive between gears.

Despite the demands of regulators, and the petrol particulate filters equipped within the new exhaust system, the M3 hasn’t totally lost its voice. Trademark six-cylinder bark is there, but looking at the size of the tailpipes, we’d expect a bit more volume and crackle. Perhaps that will come when BMW completes the final 10 per cent of the newcomer’s development programme.