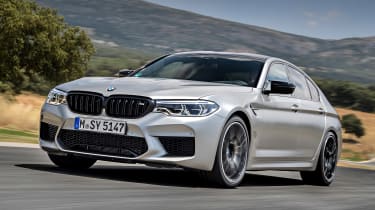 The BMW M5 Competition demands a £6,500 premium over the standard M5. That’s a lot of cash, but the improvements to the car’s handling, soundtrack and looks make it a price worth paying; even if the performance gains are minimal. The upgrades make this BMW M5 the best supersaloon in the business.

BMW’s M division has been working overtime recently. First it pulled the covers off the new M2 Competition, and now there’s an upgraded version of the flagship M5. Called the M5 Competition, the newcomer features a power boost, suspension tweaks and subtle cosmetic upgrades.

Externally, the car is identified by its gloss black badges and new 20-inch forged alloy wheels, while under the bonnet the familiar twin-turbo 4.4-litre V8 is massaged to deliver 616bhp, which is an increase of 24bhp over the standard car. And while torque remains unchanged, the 750Nm peak is hardly soft. Finally, there’s a new exhaust that aims to deliver better gas flow and a more bombastic soundtrack.

Yet while the engine modifications are relatively limited, the work to the chassis has been much more involved. For starters, the ride height has dropped by 7mm (helping to give the M5 a more hunkered and aggressive stance), while the springs are 10 per cent stiffer. At the front the camber has been adjusted, and there are stiffer engine mounts. Finally, the rear axle gets stronger rose joints in place of the standard rubber items.

You notice the suspension tweaks right away. The Competition is a little firmer at low speed, even in the Comfort setting. Go faster and the underlying stiffness remains, but it’s far from uncomfortable; and in most situations it’s no worse than the ordinary M5. 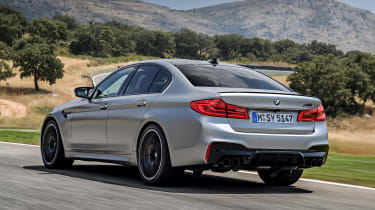 It’s only when you attack a series of corners that those suspension changes come into their own, giving the car a welcome injection of poise and agility. It now responds more quickly and precisely to the well-weighted but mute steering.

However, while it’s sharper in bends, the Competition is not really any faster in a straight line. The subtly enhanced growl of the exhaust adds more drama, but you’ll need to wring out every last rev from the V8 to notice the extra performance. Thankfully, the carbon- ceramic brakes deliver tireless and powerful stopping ability; although at £7,495, they’re not cheap.