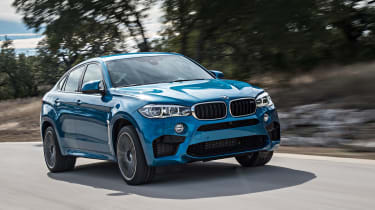 The X6M is a brute that’s easy and enjoyable to tame. In spite of its size and weight, it has awesome straight-line performance and impressive grip and control through corners. The ride is a little firm over the worst bumps, but the X6M still does the practical things rather well, too. This is the car the new Range Rover Sport SVR has to beat.

Back in 1995, BMW introduced the world to the X5 at the Road Atlanta race circuit, not far from where the car was being built in the US. It was a bold move allowing an SUV to be driven where sports cars normally ruled, but the X5 was the sportiest 4x4 we’d ever seen.

Twenty years on, the Germans are being brave again – letting us get our first taste of the latest X6 model, fettled by the company’s M performance specialists, at the Circuit of the Americas in Austin, Texas.

This is no ordinary SUV, though. The X6 is the four-door coupe version of the X5, while in X6M form it gets no end of performance modifications under the skin, a rather tasty (some might say brash) body kit and a stonking 568bhp twin turbo V8 with a massive 750NM of torque. 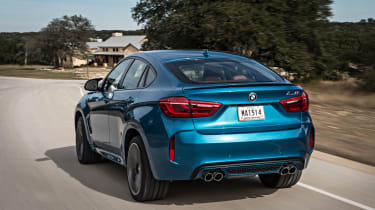 Put into context, that power has to move a car that weighs 2.3 tonnes, so how does it fair on the track Lewis Hamilton won the US Grand Prix on last year? In short, incredibly.

Sure, it’s not a sports car, but it hurtles up the steep hill to turn one keeping you pinned back in your seat, before throwing you forward at your seat belt as you slam on the ventilated disc brakes. Then you flick the delightfully chunky steering wheel and the car darts left exactly as you plan to bump over the F1 track’s kerbs before you bury the throttle to head downhill again.

The combination of massive power as you force the throttle down, then bang on the brakes before guiding the car left or right, almost defies physics when you eventually stop and look at the size of the car. It does squirm a little under the hardest braking due to the sheer mass that’s being slowed, but the nimbleness with which it goes through corners on its bespoke Michelins, and the speed with which it gets going again means it’s intoxicating fun. 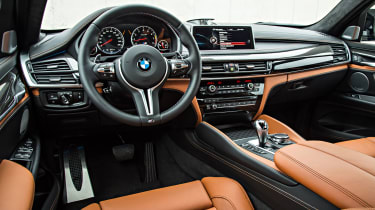 Then there’s the noise – a deep-chested bellow on full throttle with a gentle burble hinting at the excitement available at other times.

This won’t be your normal track day car, but there are no fewer than ten radiators to help keep things cool if you do drive hard (and ventilated seats to keep the driver’s temperature down, too).

On the more mundane roads around the circuit in Austin, Texas, the X6M is mild mannered and rather comfy, although it will still crash over the worst bumps with the adaptive dampers set to Comfort mode. 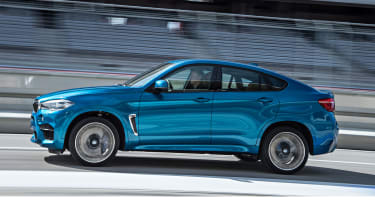 The interior is befitting of a car that costs £93,070 – beautifully trimmed and lavishly equipped, although the clash of lines and different materials inside would have the Style Police sounding their alarms.

And although this car is identical in all but that sleek body shape to the new BMW X5M (which looks bulky by comparison), there’s more than enough space in the back for three adults to sit comfortably with good leg and headroom.

The boot’s even a decent size – not what you’d expect to find behind you in car that’s this much fun as you launch out of the final corner at the Circuit of the Americas and on to another hot lap.