The all-new Citroen C3 Aircross has arrived to join a rapidly growing list of small SUVs. We head to Corsica to see if it's a contender...

There’s never been more choice in the market for small SUVs, but the Citroen C3 Aircross is as worthy a contender. Its funky styling and scope for personalisation will appeal to many, and the refined petrol and diesel engines make it feel a little more mature than just a jacked-up supermini. Our suspicion is that a mid-spec example with a few extras and 16-inch wheels could be the best choice for UK customers. Especially if Citroen nails down some reasonable finance rates.

Citroen has a solid history of producing small, practical cars; its C3 Picasso was a popular choice for those wanting a bit more space than your average supermini. Demand for baby MPVs has been almost entirely wiped out by the trending juggernaut that is the small SUV, though - which is why, instead of a new Picasso, Citroen is offering this C3 Aircross.

The C3 Aircross is one of a plethora of new small SUVs that’ll end up in UK showrooms before the end of this year. There will also be the Hyundai Kona, a new Kia Stonic and the first of a VW Group assault on the class, the SEAT Arona.

The Aircross is available to order already, in fact, although first registrations for British customers won’t be until the start of November. The car is built at the same Zaragoza plant as the Vauxhall Mokka X and Crossland X. 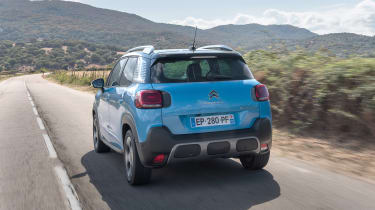 UK customers are being offered three trim levels that mirror those on the conventional C3. Touch spec brings 16-inch steel wheels, a DAB digital radio with Bluetooth media streaming, air conditioning and auto headlights. Only a handful of buyers are expected to choose this edition, which costs a penny under £14,000.

Move up to Feel and you get alloy wheels, Citroen’s seven-inch touchscreen infotainment system (incorporating Android Auto and Apple CarPlay), a leather steering wheel, LED daytime running lights and a bit of aluminium-effect trim at the front and rear bumpers to make your Aircross look a teeny bit more rugged.

The top spec is Flair, which increases the wheel size to 17-inch diamond-cut items and includes dual-zone air-con, auto wipers, electric rear windows, rear parking sensors, keyless entry and ignition, and navigation integrated into the touchscreen. It also gets a contrast-colour roof and a style pack as standard.

The engine line-up will look familiar to anyone who’s perused the higher end of the regular C3 hatchback’s range. The petrol motor is a 1.2-litre turbocharged three-cylinder unit in three states of tune: 81bhp and 118Nm of torque, 109bhp and 205Nm or 129bhp and 230Nm. Then there are two 1.6-litre four-cylinder diesels, called BlueHDi and offering either 98bhp/254Nm or 118bhp and 300Nm. 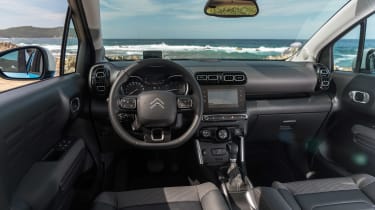 The standard gearbox on the more modest petrol and diesel units is a five-speed manual, but the 129bhp petrol and 118bhp diesel each get a six-speed unit. The mid-spec petrol can also be ordered with a six-speed torque converter automatic - a key feature for Citroen UK, who will be hoping to keep some of the existing C3 Picasso customers who got into the car through Motability.

All C3 Aircrosses are front-wheel drive, of course. Indeed, Citroen isn’t making too much noise about off-road ability at all; you can spec Grip Control, which plays around with the car’s traction control system to tailor it to a range of surfaces, but it’s a £400 option, even on the range-topping Flair.

The diesels are the more efficient units on CO2 emissions (the lesser-powered version is the cleanest C3 Aircross of all, with 104g/km) - but the petrols aren’t far behind, and all manual-gearbox editions are under 120g/km. The auto takes a hit, naturally, at 126g/km.

Citroen is ramping up personalisation as a key feature of the C3 Aircross, and there’s no denying that there are plenty of colour options to choose from. The roof can be body-coloured, black, white or ‘Spicy Orange’ - a shade that also features in a line-up of eight main colours. It’s worth noting, though, that the only non-cost paint colour across the range is a flat red; the other flat option, white, will cost you £295, while the metallic shades are £520 a pop. 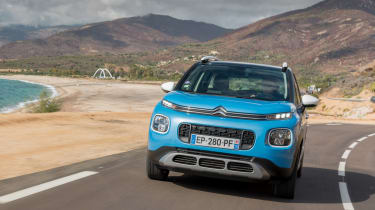 On the move, the C3 Aircross feels pretty much as a larger, taller version of the C3 should - and in the most part, that’s no bad thing. The chassis underneath it all is PSA’s familiar PF1 platform, and while it continues its well-known trait of allowing the occasional sharp road imperfection to jar through into the cabin, the extra bit of travel afforded by the Aircross’s extra height does make it feel a bit more accomplished than a C3.

It hangs on surprisingly well, too. Citroen’s test route could scarcely have been twistier, based as it was on the mountain roads of Corsica. But the Aircross showed decent resistance to pronounced body roll, and while the steering is far from communicative, it’s direct enough for you to learn to lean on it.

Carry a bit too much speed into a corner and the Aircross will punish you not with any sideways drama but with predictable, consistent understeer. We tried examples on 17-inch and 16-inch wheels and the larger tyres had a tendency to scrub across the tarmac; the 16-inchers actually behaved themselves too, but there was a noticeable groan from the straining sidewalls. 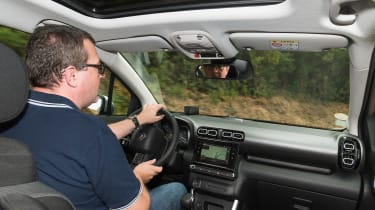 We sampled the mid-range petrol, complete with automatic gearbox, and the high-powered diesel with its six-speed manual. The petrol is a refined unit, only feeling strained when you get to around 4,000rpm but with enough low-end shove to avoid the need to go there that often.

The auto box, meanwhile, is an Aisin unit that’s also seen use in various MINIs; it’s not infallible, but it’s generally smart enough for swift, smooth progress on all but the twistiest of roads.

The diesel feels a more grown-up offering altogether - helped, no doubt, by hefty torque that cuts in at around 1,250rpm. It’s not the quickest C3 Aircross on paper (that’s the high-powered petrol) but it’s almost certain to be so in the real world. The diesel engine - PSA’s well-proven 1.6 - is a great little motor, blending that admirable bottom-end shove with smoothness that only starts to break up at levels of revs that you simply don’t need to use.

We tried this engine with the six-speed manual, which is a solid enough gearbox let down by a slightly vague linkage (a typical PSA trait, unfortunately) and a squared-off, stylised gearknob that isn’t particularly comfortable in the hand. 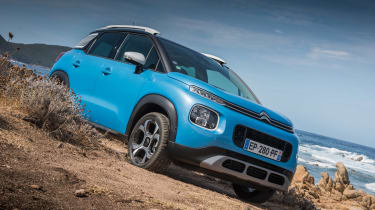 On board, the C3 Aircross gets a few more of Citroen’s latest attempts to reinvent ‘comfort’ - most notably wide, armchair-like front seats that have more padding than you’d usually find. The dashboard is almost a straight lift from the C3 supermini, although you can add some pleasing fabrics to the main fascia if you choose well from the options list.

The infotainment system - which also includes features like the air-con controls - is a hotchpotch of mixed graphics and typefaces, but it’s quick enough to respond. We wouldn’t advise going for top spec just to get navigation, though, when Feel models offer the same screen and Apple CarPlay and Android Auto connectivity.

There’s enough space on board for four six-footers to sit in comfort, and even if those in the rear are tight on kneeroom, they’ll be helped by squidgy, soft backs to the front seats. Rear headroom could be a little bit tighter, though, especially if you go for the full-length panoramic sunroof.

The boot is a useful 410 litres with the rear seats pushed back, and you can slide them individually to increase this capacity to up to 520 litres, or fold them down completely to open it up to 1,289 litres. The floor is flexible too, allowing you to prioritise either a flat load bay or overall capacity. There’s also a neat vertical slot at foremost edge of the boot, for you to tuck the parcel shelf away and accommodate taller loads.