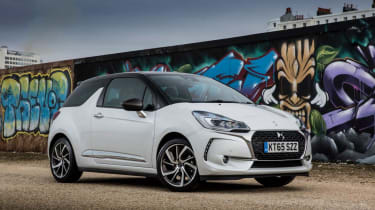 The DS 3 might be nothing more than a rebadged Citroen, but does that matter when it is appealing on so many levels? The metamorphosis from Citroen DS3 to standalone DS 3 didn’t fool anyone, but by the time the brand’s smallest car was facelifted in 2016 it looked sharper and brought some useful updates. While range-topping DS 3s are costly to purchase new, they can be better value as a used buy, especially if they’ve got a few choice features from the options list. Just be aware that there’s an extensive range of extras, with lots of opportunities to personalise every aspect of the car. So pin down exactly what you’re getting for your money before buying a DS.

Citroen is known for building cars that put low purchase prices and running costs first, so when the French brand decided to move upmarket in 2010 with the DS3, some questioned its thinking.

But the DS3 soon proved popular with UK buyers, and it was easy to see why. As well as offering sharp design and decent value, it was good to drive, well made and reliable. Citroen spun off DS as a separate brand in 2014, yet the ‘standalone’ DS 3 didn’t reach showrooms for another year.

Regardless of its name, eight years after the car’s introduction, does buying a second-hand one make sense? 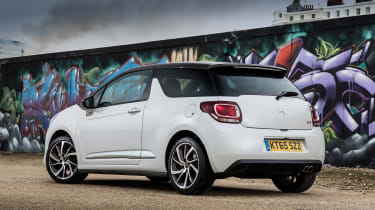 The Citroen DS3 was launched in spring 2010; five years later the same car was unveiled as part of the new DS range, now a Citroen sub-brand.

A facelifted DS 3 went on sale in 2016 and in place of the previous DSign, DStyle, DSport and DSport Plus trims there were now Chic, Elegance and Prestige. Topping the range was a line-up of Performance Black models (comprising Ultra Prestige, Performance and Performance Black variants).

The petrol engines, developed with BMW, are sweet and frugal, but the 1.6 HDi is the star. It’s economical, smooth and torquey; even the 99bhp edition is nippy. 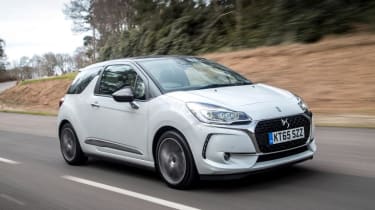 The EAT automatic transmission isn’t that slick, but owners generally get used to it in time. All DS 3s have reasonable equipment levels; the Chic has a seven-inch touchscreen with DAB radio and Bluetooth, 16-inch alloy wheels, air-con and cruise control with a speed limiter.

Alternatives to the Citroen DS3/DS 3

A MINI is the obvious alternative. It’s more expensive to buy and not as practical or as comfortable, yet the build quality is better and there’s more choice.

The Fiat 500 is another rival and, like the Citroen and MINI, comes in open or closed forms. But the Fiat is smaller and much more cramped inside, with a far smaller boot. Still, it’s fun to drive and reasonably reliable, and there are some thrilling Abarth editions available.

For value and fun you can’t really beat the Ford Fiesta. There are lots to choose from and prices are keen, but you won’t stand out in one like you would in a DS 3.

Some THP units have suffered water pump and turbocharger failures, plus hesitation and misfiring.

Make sure the windows go up and down smoothly, because the regulators can fail and repairing them is costly. 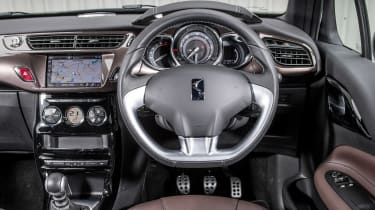 The DS 3’s cabin generally feels well made and it looks good, but rear seat access is hampered by the three-door layout. While the seats are comfortable and all cars get a height-adjustable driver’s seat, legroom in the back is tight. There’s a reasonable 285-litre boot (980 litres with the rear seats folded), although the cabrio has a smaller 245-litre load area. 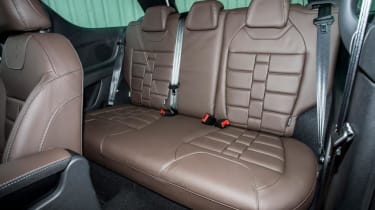 The DS3 has been recalled 19 times, and the DS 3 five times between March 2016 and December 2017. The first was for a lack of turbo lubrication due to possible oil leaks; the second was for potential ABS or ESP failure.

Gearbox issues caused the third campaign. The most recent two were due to incorrectly tightened steering and suspension fixings and possible engine failure.

While the DS 3 hasn’t appeared in the Driver Power new or used car satisfaction surveys, the Citroen DS3 just crept into the Driver Power 2017 used car poll in 69th place. There were no high scores; the best was 40th for the exterior design and finish. Practicality and infotainment were both near the bottom of the table.