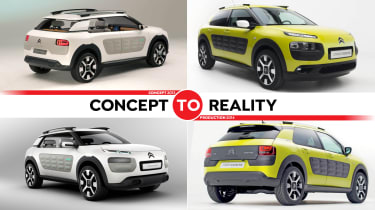 Ask any senior exec within the car industry to name the biggest problem any brand can face and they’ll probably mention overcapacity, residual values, expensive platforms – and lack of direction. Car companies need to know where they’re going and what they stand for, because we, the consumers, demand it. A listless badge that doesn’t mean anything simply won’t cut the mustard on the purchase that probably says more about us than almost any other buy.

For the latest instalment in our Concept to Reality series, we’re looking at a vehicle that redefined the ambitions and resharpened the focus of one of the most charismatic car brands in the business: Citroen. And, bizarrely, for such a profoundly French institution, it was the work of a Brit. It’s the Cactus Concept.

Citroen was founded in 1919 but, by the start of this decade, the company had a problem. Its PSA stablemate Peugeot had a firm reputation for more premium mainstream offerings, and Citroen’s own DS sub-brand was bringing in decent profits with its C3-based DS 3.

But Citroen itself was looking a little lost. The C4 Picasso was a decent MPV, but that market was already in decline. The regular C4 itself was dull beyond words, an anonymous five-door hatch selling in small numbers. More than that, buyers were no longer sure of what Citroen actually meant – and there was no obvious way of turning the firm’s design language into one suitable for the types of cars we’d all started to buy: SUVs.

Enter British designer Mark Lloyd, who’d started his career at Jaguar before joining PSA, Citroen’s parent group, as an exterior designer in 1999, and then rising through the ranks. Lloyd knew that Citroen had to rediscover itself. And he took inspiration from an earlier concept created under his direction: the C-Cactus, which had presented a more pared-back approach. The name Cactus was chosen, in fact, because the plant itself consumes very little, but protects itself in aggressive environments. And Lloyd and his team took this to a new level with the Cactus Concept, which was unveiled at the 2013 Frankfurt Motor Show.

The crossover-esque creation had sophisticated, yet simple panel surfacing, a clean interior that mixed technology with home comforts from a living room, and ‘Airbumps’ that promised to give the owner peace of mind in all but the worst supermarket car parks. It was bright, bold and funky in all sorts of practical ways.

Turning the Cactus Concept into the Cactus was relatively simple, not least because the show car had been conceived with production in mind. The Airbumps had already been tested by Citroen engineers equipped with fully laden shopping trolleys, while the PF1 platform was old but proven, and compatible with modern-enough engines. 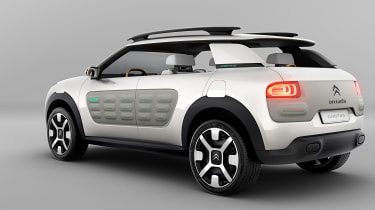 Compromises had to be made in some areas. The full-width front sofa had to make way for a hybrid two-seat layout (albeit with very squidgy fabric in the middle); some of the interior plastics were hard and scratchy. But the minimalist instrument panel was kept, along with the luggage-inspired straps for the door handles and glovebox lid.

Airbumps, too, remained an integral part of the design, although Citroen did make them optional when it developed the Cactus’s looks to design the C3 supermini in 2016. These days, they’re a signature as much as a purely functional item – used by the designers of the C5 Aircross to help disguise the depth of sheet metal along the car’s flanks, for example.

The Cactus’s front-end design has had a huge influence on the ‘C’ models that we know today. It’s the face of Citroen as we know it, and this coherent approach has put the brand in a stronger place now than it was at the start of the last decade. A new coupé-SUV will get the C4 badge next year, leaving the C4 Cactus (as it’s now known) to be phased out. Its work is almost done.

What do you think of the Citroen C4 Cactus' looks? Let us know in the comments below...

Visit Concept to reality: Volkswagen up! 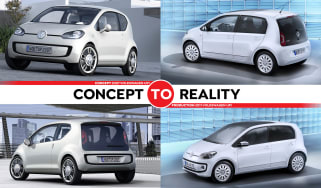 Concept to reality: Volkswagen up!

We trace the evolution of the 2007 Volkswagen up! concept through to the 2011 production car
Visit Concept to reality: Ford Probe III to Ford Sierra 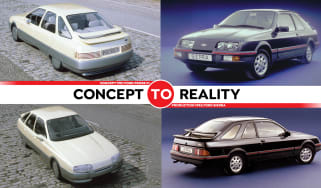 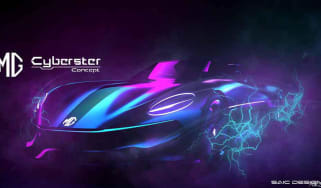 MG has released sketches of the Cyberster, an electric sports car concept reviving the spirit of the old MG B and MG TF
Visit Concept to reality: Land Rover LRX to Range Rover Evoque 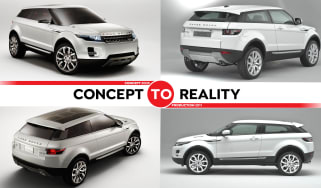