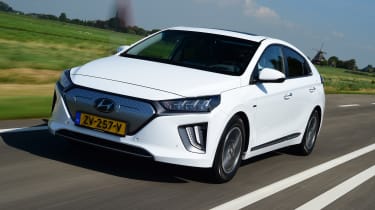 The Hyundai Ioniq is at its best as a fully electric car, and all of the improvements introduced in this mid-life facelift are positive. The hefty boost in battery capacity will increase its appeal to a wider range of buyers and although it can’t match the range of its sister EV, the Kona Electric, the Ioniq is cheaper to buy. The refreshed infotainment system should keep its tech up to speed for a couple of years, too.

The Hyundai Ioniq range has been treated to a mid-life refresh. We’ve already sampled the updated hybrid variant, and now it’s the turn of the all-electric model.

While the Ioniq Hybrid is carried over almost mechanically unchanged from the original, the Ioniq Electric has been tweaked - most notably to increase overall range. The changes can’t come soon enough: with brands like Peugeot, Vauxhall and MINI bringing fully electric - and reasonably attainable - cars to market over the coming months, Hyundai needs its zero-emission family at its peak to remain competitive.

While it seems like the logical way to boost the Ioniq would be to just drop-in one of the larger batteries from the brand’s own Kona Electric SUV, there simply isn’t the physical space beneath the floor of the five-door hatchback body. So Hyundai has focussed on the cells’ energy density to boost mileage instead. 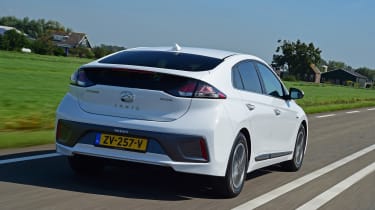 Battery capacity has grown to 38.3kWh - up 33 percent on the previous 28kWh unit - while taking up the same amount of space. System upgrades help to make the most of those extra Watts, too: a regenerative braking system, borrowed from the Kona, enables the driver to not only flip steering wheel paddles to adjust the level of energy recuperated when slowing down, but introduces the ability to bring the car to a complete stop with them, too.

The upshot of these tweaks is that while the outgoing car would offer an official NEDC range of 174 miles (a figure all but impossible to match in the real world), the new Ioniq offers a WLTP-rated 194 mile range (which owners should be able to get close to). It’s a little down on the 242 miles the new Renault Zoe can cover in official tests, but it’s still plenty for the overwhelming majority of drivers.

With more cells to top up, charging times have increased a little compared to the outgoing model. A rapid charge from a 100kW station will boost the battery level from zero to 80 percent in 54 minutes, while a 7kW charger will achieve the same increase in six hours and five minutes. 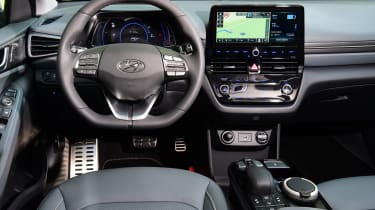 While torque remains the same at 295Nm, overall power has jumped up from 119bhp to 134bhp. This has seen the 0-62mph time drop by half a second to 9.7 seconds - a gain not likely to be noticed unless you try old and new back-to-back. But as before - and typical of electric cars - the Ioniq feels lively and responsive. It’s at its best around town, where the instant reaction from the electric motor (a single unit drives the front wheels) gives lively acceleration. It’s smooth too, enabling very precise throttle control when manoeuvring. It’s just a shame that, as before, the grabby brakes make the process of slowing rather less serene.

While the acceleration tails off more markedly than in similarly powerful combustion cars at higher speeds, the relative peace e-motors offer is more than enough compensation. With no grumbling petrol or diesel engine and a slippery body shape, the only noise you’ll notice on the motorway comes from the tyres.

The Ioniq’s suspension layout is carried over from the previous model and, as before, ride and handling are fine, rather than outstanding. Riding on 16-inch alloy wheels with a fairly generous amount of sidewall in the tyres, the ride over broken surfaces is smooth for the most part; though over bumpy roads, the rear suspension can bobble around a little.

Like the rest of the Ioniq range, the styling tweaks to the Ioniq Electric are subtle. There are revised graphics for both the head and tail lights, which all get LED tech. Those 16-inch alloys are a new, slightly chintzy, design, and front and rear bumpers are reprofiled, too. As before, the Ioniq Electric is most obviously set apart from hybrid models by the front grille: the grey panel sits flush with the bumper, and features two small flaps that can open up to various degrees. These provide cooling to the drive systems when it’s needed and improve aero efficiency when it’s not.

But it’s inside the Ioniq where the most significant updates have taken place. The dashboard layout has been redesigned to accomodate a much larger 10.25-inch infotainment system. The display is placed higher on the dash than before to make it easier to read, while the air vents have been shifted below it, separating the screen from revised air con controls. It all looks very smart, but the temperature controls, now touch sensitive, are fiddly to use on the move.

The infotainment system itself will feel familiar to anyone that’s used the previous version, but is brighter, sharper, and its wider layout allows for both detailed mapping and entertainment functions to be shown at the same time. There’s a bank of shortcut keys beneath the screen but, as with the air con buttons, they’re all touch sensitive.

That screen is standard on both of the two trim levels available. The Premium kicks off with heated front seats, lane departure warning, wireless phone charging and dual-zone climate control. Above it sits the Premium SE, which adds leather-trimmed, ventilated, heated and electrically adjustable seats, parking sensors all round, and a semi-autonomous lane-following system.

Prices start at £29,450 for the Premium and £31,450 for the Premium SE. Those figures include the government grant for electric vehicles, and it means that, as discounts aren’t offered for plug-in hybrid vehicles anymore, the fully electric model is roughly £500 cheaper than the equivalent Ioniq PHEV.