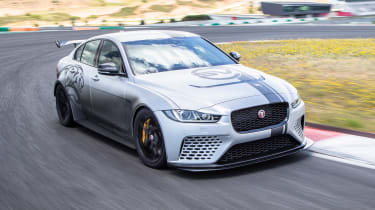 Jaguar’s SVO engineers have produced a really fast and fun track car that also works very well on the road. Yes it’s pricey, but the Project 8’s performance and attention to detail justify the outlay. The only disappointments are that Jag is building just 300 left-hand-drive examples, and that it doesn’t plan to use the lessons learned to produce a more affordable performance model for the regular XE line-up.

We’ve seen the spy shots, drooled over the static motor show stand star and even been for a ride in the passenger seat, but now we’re finally getting to drive Jaguar’s stunning XE SV Project 8.

Billed as the fastest road car the brand has ever built, the newcomer has already claimed the lap record for a production saloon car at the tortuous Nürburgring in Germany and aims to be the most thrilling four-door machine that money can buy.

Plenty of column inches have already been lavished on the Project 8, but given how special the car is, it’s worth revisiting some of the highlights. For starters, while the wild bodywork bears a passing resemblance to that of a regular XE, only the aluminium roof panel and door skins are carried over unchanged. For the wider wheelarches, deeper front and rear bumpers and bonnet, lightweight carbon fibre is used. 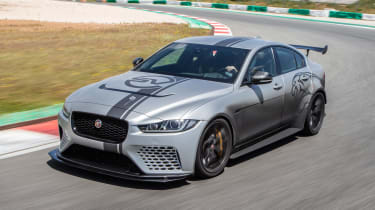 Under the dramatic exterior is a chassis that’s been extensively modified. For instance, the front and rear tracks have been extended by 24mm and 73mm respectively, while the double-wishbone suspension gets stiffer bushes and motorsport-inspired rose joints for even greater precision and control. On top of this are retuned anti-roll bars and recalibrated adaptive dampers and electric power steering.

Yet it’s what’s lurking under the lightweight bonnet that really grabs your attention, because it’s here you’ll find the supercharged 5.0-litre V8. Based on the same unit used in the F-Type SVR, it has a revised induction system and a titanium exhaust that help liberate 592bhp and a rippling 700Nm of torque. Helping put all this power to the road is a clever rear-biased four-wheel-drive system (a maximum of 50 per cent of the engine’s power can go to the front axle in Normal mode, but in more sporty settings it’s as much as 100 per cent to the rear), which is driven through an eight-speed auto box that’s been tweaked to deliver faster shifts.

Compared with the outside, the cabin of the Project 8 feels rather restrained. Well, up to a point. Up front, there’s the standard XE dashboard, complete with touchscreen infotainment, plus a pair of high-backed, figure-hugging seats. 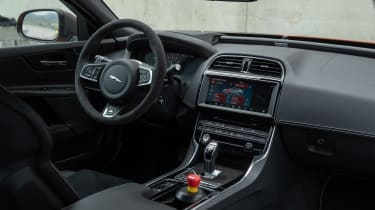 However, things get more radical in the rear, where the bench seat is replaced by two individual chairs – unless you go for the Track Pack, which replaces the seats with a rollcage and strengthening panel.

Thumb the starter button and that V8 bellows into life before settling to a purposefully burbling idle. Pull the stubby gear selector into Drive before squeezing the throttle and the big cat leaps into life. As you’d expect, acceleration is eye-widening, the Jag lunging relentlessly towards the horizon with every prod of the accelerator pedal.

There are seemingly endless reserves of power, and as the needle on the rev counter swings around to the red line it’s easy to believe the claimed 0-60mph time of 3.3 seconds – if anything, the Project 8 feels quicker still. Just as impressive is the ear-splitting noise that accompanies it; the bellowing, crackling exhaust note is pure NASCAR. It’s not subtle, but then you don’t buy a car like this to blend into the background.

Guide the Project 8 through a series of bends and it’s clear the chassis is well up to the task of handling that volcanic engine, even when considering the combination of track-biased Michelin Cup 2 tyres and a damp test route.

Eco driving mode has been deleted, leaving Normal, Dynamic and the newly added Track. In the former the steering is direct and meaty, allowing you to place the car with confidence despite its width. There’s plenty of front-end grip, too, while the four-wheel-drive traction helps fire you down the next straight with breathtaking violence. 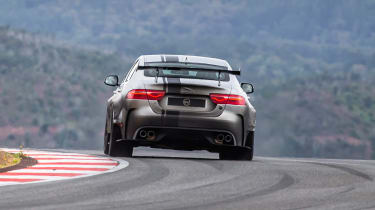 The damping is taut as well, but with enough suppleness to cope with some viciously torn tarmac. Switch to Dynamic and you get a sharper throttle and recalibrated transmission and electronic limited-slip differential, allowing you to tweak your line through a bend using a combination of throttle and steering.

As you’d expect, the Project 8 feels right at home on a track, despite a hefty kerbweight of 1,745kg in its lightest Track Pack guise. Within the safe confines of a circuit you can exploit the balanced and approachable driving dynamics, and even switching off the electronic stability control fails to upset this XE’s poise – you can push the car into tail slides, but it’s at its best when being driven with neatness and precision.

It’s also on the track that you can really experience the potent, fade-free stopping power of the carbon-ceramic brakes standard on the Project 8.