We get exclusive early access to crucial tax-friendly exec 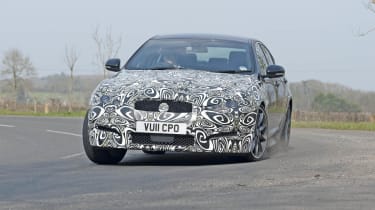 Jaguar is anticipating that around 60 per cent of XFs will  be ordered with this economical new 2.2-litre diesel – and we’ve no reason to doubt that. In fact, with fuel prices a hot topic at the moment, those sales expectations could be an underestimate. The combination of an 800-mile range with strong, smooth performance makes this the best engine choice in the range, and with a revised exterior and interior due next, the new XF is looking very desirable indeed.

It's time for the most important Jaguar of the year to give us a swirl... Disguised prototypes  are usually found in the news section of Auto Express, but  this time we’ve got behind the wheel of one! This is the big cat’s new 2.2-litre four-cylinder diesel XF, which can return 50mpg.
The super-frugal engine is  only one of a whole range of updates for the 2012 model  year exec. The car debuts at the New York Motor Show in a few weeks’ time and goes on sale  late next month, with the first deliveries in September. Among the changes are a comprehensive facelift – hence the swirly  disguise on this pre-production prototype – tweaks to boost cabin quality and updated dampers to improve the ride and handling.

Video: watch CarBuyer's video review of the Jaguar XF
[[{"type":"media","view_mode":"content_narrow","fid":"68287","attributes":{"alt":"","class":"media-image"}}]]
The big news is what’s under the bonnet – and Jaguar has given us exclusive access on UK roads to test just that. It’s not only the 188bhp turbodiesel that’s new, though; it’s hooked up to an eight-speed auto box, developed by transmission specialist ZF,  and a stop-start system, too.
With the vast majority of  XFs being sold to company  car drivers, the powertrain is  a crucial addition, as it allows Jaguar to compete with small  diesels such as Audi’s new  A6 2.0 TDI, BMW’s 520d and  the Mercedes E220 CDI.
So, how does the model  stack up? On paper, it builds  a strong case. The firm claims combined economy of 52.3mpg, plus CO2 emissions of 149g/km. These figures are far better than those for the 3.0-litre V6 diesel XF, which returns 42mpg and 179g/km respectively – although it trails the 520d, which posts 54.3mpg and 137g/km.
Still, the good news is that  this means the 2.2-litre is the cheapest XF to run so far. Jaguar claims the car will do 800 miles between fill-ups, while it sits in road tax band F, leading to a bill of £130 a year. The company  car tax rate is 21 per cent.
That’s all very well, but is the newcomer any good to drive? Well, it’s certainly quiet. The engine is a development of one used by the Ford Mondeo, yet in the XF it’s mounted longitudinally and features a host of new parts, such as a water-cooled turbo  and low-friction pistons.
Refinement is boosted by  extra sound deadening, including active engine mounts and a twin-layer bulkhead. Press the starter button, and very little noise enters the cabin – the diesel settles to  a hushed, gruff rumble. The car  is quick off the line, with 0-62mph taking 8.5 seconds. However, more compelling and usable in the real world are the deep reserves of overtaking urge, thanks to the 450Nm of torque  available from only 2,000rpm.
The transmission gets the thumbs-up, too. Despite giving a choice of eight gears, it shuffles the ratios so softly you barely notice it at work. You can take control with the steering wheel-mounted paddles yourself, but the box kicks down extremely swiftly and changes right on the red line, so there’s little point. On the motorway, that long eighth gear results in hushed progress as well. Come to a halt and the stop-start shuts the engine down almost immediately. There can be a slight shudder as you release the brake and the diesel restarts, but it fires up very quickly indeed.
On the evidence of this early drive, the engine should be the pick of the range – and for such a crucial model, that’s great news.
Share this on TwitterShare this on FacebookEmail