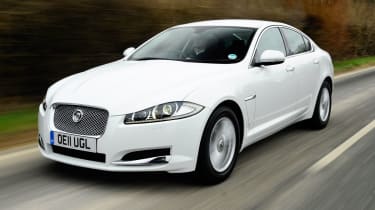 The Jaguar XF 2.2-litre 161bhp is a comfortable cruiser with an exquisite, well equipped cabin, predictable handling and great ride. We’re tempted by the 187bhp model, but the price difference isn’t worth the added running costs for fleet buyers. Our only criticism is the noisy four-cylinder engine, which spoils an otherwise silky smooth drivetrain.

The Jaguar XF 2.2 diesel is all about numbers – but not horsepower. The entry-level model costs £29,950, but Jaguar says most buyers will go for SE Business trim, which adds sat-nav for another £1,550.
Our car is the £32,950 Luxury, which has a leather interior, six-way power adustable seats and its own design of 17-inch alloys.
The 161bhp 2.2-litre diesel is a detuned version of the existing 187bhp engine. With less power, you’d expect better economy, and while Jaguar admits it’s working on reducing the 149g/km CO2 figure, the 52.3mpg fuel economy is the same as the 187bhp model’s.
So who’d choose this one? Fleet buyers, according to Jaguar. The 161bhp output has been determined by the Belgian market, as engines of this power (and below) get a considerable tax break there. But there are also benefits for UK buyers, as this car is four insurance groups lower (33E) than the 187bhp model – and £4,000 cheaper.

From the outside, only the smaller wheels give the lower- cost model away, as the 2.2 still has the LEDs, chrome detailing and grille of more expensive XFs.
Inside, the Luxury model is sumptuous. The overall feel is not as high-quality as a BMW or Mercedes cabin, but distinctive design features of the XF remain, such as the rising gear selector, auto-folding air vents, excellent finish and textured radio controls on the steering wheel. The Luxury trim’s touchscreen and full leather trim (the SE makes do with suede) add a final touch of class to a very impressive interior.
The driving position is relaxed rather than sporting. The wide, flat and comfortable seats are more suited to long-distance touring than holding you in place around corners, which is in keeping with this car’s nature.
The diesel engine’s vibrations are kept to minimum, but even at idle there’s no fooling bystanders that you’re in a petrol car. It’s even louder – yet still smooth – under acceleration. The eight-speed gearbox, controlled by paddles on the steering wheel, is perfectly suited to the engine, delivering near-seamless shifts.
The engine’s peak torque of 400Nm comes in at 2,000rpm, and motorway slip roads reveal the car to be reasonably capable, but not what you’d call fast. The manufacturer claims a 0-62mph time of 9.9 seconds.
Despite its long-distance focus, the XF diesel still handles well. There’s a bit of play in the steering and it could definitely do with more feel, but it copes with twists and turns admirably considering the very supple ride. Potholes and bumps are almost imperceptible, meaning the refinement in the cabin is excellent. Only the noisy diesel spoils the experience.
Jaguar says it expects to sell 35,000 XFs this year, with the 161bhp diesel version making up the largest single proportion (35 per cent) of that total. It hits showrooms in April, priced from £29,950.
Share this on TwitterShare this on FacebookEmail