Kia's Carens MPV won't set the world alight with its design, but it makes a sound buy thanks to strong economy and a class leading warranty 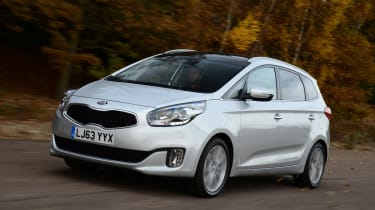 Plenty of people see the MPV as little more than a tool, and it’s those people who will be most impressed by the Kia Carens. Kia’s people carrier is a purchase you resolutely make with the head rather than the heart, but that’s not to say it’s a bad one.

The Carens is neatly styled, with Kia’s trademark ‘tiger nose’ grille taking pride of place at the front, while stylish creases mark the doors. It’s still not exactly thrilling to look at, though, and that’s not helped by the colour palette on offer.

Buyers get the choice of white, black, three different shades of silver and one dark, murky ‘Mysterious Blue’. It’s pretty difficult to make your Carens stand out. 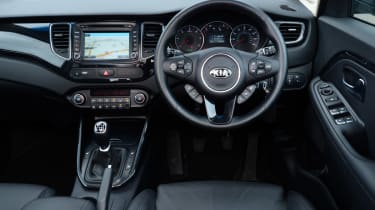 The interior doesn’t really stand out either. It’s well put together and pretty generously equipped, but it’s also dark and nowhere near as stylish as the likes of the Citroen C4 SpaceTourer.

Space for passengers in the middle row is good, but rearmost passengers will be very cramped, making the Carens an occasional seven-seater at best.

The Carens has a couple of trump cards to play, though. Economy from the 1.7-litre diesel engine is strong at a claimed 61.4mpg, which is competitive for a seven-seat MPV. The Carens also benefits from Kia’s amazing seven-year warranty, which should keep bills from unexpected repairs to a minimum.