Serious performance despite its size, plus a seriously capable drive that is sporty, comfortable and peerless off-road 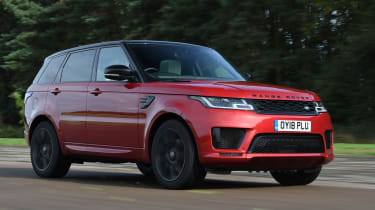 The second-generation Range Rover Sport really moved the game on in terms of drive and dynamics. The all-new, all-aluminium architecture is very stiff and robust, and the firm’s advanced suspension design and accomplished four-wheel drive system give a driving experience that is unlikely to disappoint.

The natural abilities of the Range Rover Sport are clear from the off. Although the steering is a bit light, it’s also extremely accurate and crisp, making it easy to drive this big machine both in town and on twisting B-roads. The balance is spot on, it never feels top-heavy or vague, and generally has control and composure that would amaze those who dismiss it as a big, heavy 4x4.

All Range Rover Sports come as standard with height-adjustable standard air-suspension and Land Rover Adaptive Dynamics. This system adjusts the suspension and electronic controls to suit the road conditions, and it includes a Dynamic mode that impressively minimises body roll and maximises grip. Sure, the ride becomes knobblier as a result, but it’s beautifully accomplished in regular mode, with peerless body control, ample absorbency and terrific stability. Dynamically, the Range Rover Sport is little short of superb.

Thanks to Land Rover’s peerless off-road pedigree, the Sport's abilities outclass those of its rivals when you head off the beaten track. It has an electronic centre differential and Land Rover’s clever Terrain Response system, which optimises the car for mud, gravel, snow, rocks and sand by juggling suspension height, gearbox settings, throttle response and traction control profiles. Despite the car’s size and weight and luxury billing, the combination of rugged chassis components and clever electronics give this big SUV some impressive off-road credentials. 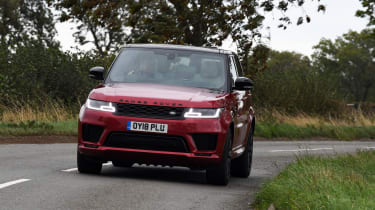 Even driving across rivers should hold no nasty surprises, thanks to an impressive 850mm wading depth – there’s even a gadget that shows you how deep the water that you’re driving through is.

HSE Dynamic models and above come with an enhanced Terrain Response 2 system – this includes automatic terrain sensing, which engages the correct mode when it senses a change in surface below: ingenious stuff. Also on Dynamic models is the JLR All-Terrain Response Control. This is a sort of ‘off-road cruise control’, letting the driver select a desired speed and leaving the car to do all the hard work. It can even set the vehicle moving from rest, which is ideal when grip is low or the terrain is rough or steep.

The SVR is, of course, another matter entirely. Decidedly performance-focused, it has massive wheels, big brakes, stiffened suspension and intricate development throughout to give it performance that makes it the SUV king of the Nurburgring. The simple fact that its top speed has been raised to 162mph should show the development that’s gone into this 2.5-tonne machine. It shouldn’t work, and shouldn’t deliver Jaguar-like engagement – which makes it all the more remarkable that it does.

The P400 version uses a straight-six petrol engine that pushes out 395bhp with the help of a 48-volt mild-hybrid system. It’s an engine that imbues the Sport with smooth, potent performance, especially in its low and mid-range - with a 0-62mph time of 5.9 seconds and 140mph maximum speed. The same mild-hybrid tech is included on the D300 and D350 diesel variants, with resulting sprint times of 7.3 seconds and 6.9 seconds, respectively.

It has the claimed ability to travel up to 25 miles on pure electric drive – although this will depend significantly on how careful you are with your right foot – with a top speed of 85mph. It will also give the 5.0-litre V8 a run for its money in pure performance terms, sprinting to 62mph from rest in 6.3 seconds, before reaching a top speed of 137mph. 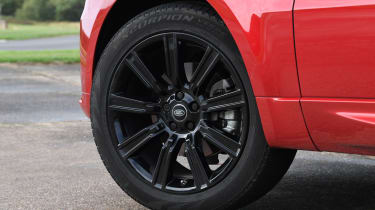 Around town, it's at its best, with the electric motor giving quick and quiet acceleration. However, when you have to rely on the four-cylinder engine, it reveals some shortcomings. The extra weight of the plug-in system means the engine has to work harder than it would otherwise when it isn’t getting an EV boost – and it’s not the most refined unit. So, if you floor the throttle and ask for maximum power from both power sources, then the whine of the engine is slightly at odds with the sporting luxury of the car.

Many may be tempted by the ultra-smooth, appealing-sounding supercharged V8 petrol which, even in ‘basic’ guise, produces 518bhp for a 0-62mph dash of 5.3 seconds.

However, the 567bhp SVR is even faster, doing the benchmark sprint in just 4.5 seconds, with an absolutely wonderful V8 bark in the background for good measure. It’s a wickedly exciting performance machine.

All Range Rover Sport models are fitted with an excellent eight-speed automatic transmission. This ZF unit is slick-shifting, intuitive and discreet; and rather than the rotary controller in the Range Rover, it’s controlled by a stick-shift automatic lever, which is taken straight from the Jaguar F-Type for a bit of sporty JLR family lineage.