We’re trying to squeeze maximum fuel economy from our hybrid 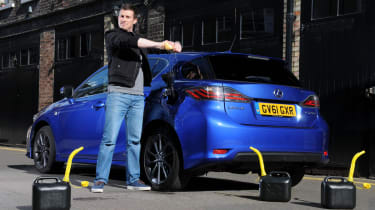 8
There's something about hybrids which makes you want to wring every last bit of fuel economy out of them. At least, this is what I’ve found with our CT 200h.
Lexus says it can do almost 69mpg, and based on past experience with other hybrids, including the Toyota Prius on which the CT is based, if you drive like a complete saint, the claimed figures are just about achievable. And so I’ve become a slave to the CT’s trip computer. In fact, every journey into work is a challenge to beat my personal best of 63.4mpg.
However, this got me thinking. So far, I have only driven the CT around town, but what kind of economy does it deliver on the motorway? A holiday to York gave me the first opportunity to find out, so I reset the on-board computer and didn’t look at it again until the end of the 400-mile round trip.
When I eventually did, I was in for a shock – it read just 43.5mpg. Admittedly, I didn’t drive in my usual eco-friendly way, but I was by no means heavy with the throttle.

I posted the CT’s motorway fuel consumption on Twitter and asked others to tweet what their cars return at higher speeds. The replies came in thick and fast: @drivingspirity claimed his Focus diesel does 62mpg while @kevinkevin1991’s Renault Clio dCi apparently manages 68mpg. However, @NigelBlack topped the lot. He tweeted a picture of his VW Golf BlueMotion’s trip computer showing 76.4mpg. Impressive!
This little bit of ad-hoc research suggests that if you mainly do motorway miles, you’ll be better off with a traditional diesel hatchback than a hi-tech petrol-electric hybrid. However, things aren’t that clear-cut. During its time with us so far, the CT has averaged 45.3mpg, with most of its 4,146 miles clocked up on longer journeys in the hands of colleagues.
A quick flick through a few recent editions of Auto Express reveals the only cars on our fleet which are currently providing better economy are the Suzuki Swift and Vauxhall Corsa diesels. Both are doing about 54mpg, which is still quite a way off what their respective manufacturers claim.
And I know which car I would rather be in. That’s down to the thing which impresses me most about the CT200h – its classy cabin. The design is more stylish than the Audi A3’s and the build quality superior to that of the BMW 1 Series – the only cheap plastic I can find is the panel for the memory seat function.
The best bit? Well, that’s the joystick control for the infotainment system which is so easy to use that it makes the swivel wheel set-ups of rival premium models seem unnecessarily clunky. Even the CT’s distinctive looks have grown on me – the beefy bodykit of our F Sport model combined with the manly Ultra Blue paint makes it seem less like a car for Kylie Minogue, who, of course, starred in the car’s ad campaign.
My only real issues with the Lexus are the harsh ride, which is a pain at low speeds and occasionally irritating on the motorway, and the fact it’s not very entertaining to drive… unless of course you are in town and trying to beat your economy personal best. Then the CT200h is actually quite good fun.

“The problem with the Lexus is its hefty price tag. For the same money, you could have a bigger, more engaging and equally efficient BMW 318d Sport.”James Disdale, Road test editor

“My partner recently bought a CT 200h, and I liked it so much to drive that I immediately traded my old Lexus IS250 for a CT200h F Sport.”whittleseam, via www.autoexpress.co.uk