The new Mercedes-AMG A 35 is the most potent A-Class for now, boasting 302bhp and 400Nm of torque 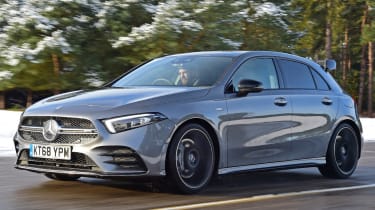 Some people will disregard the A 35 as little more than a junior AMG, but those people will be missing a treat. Mercedes has worked hard to turn the regular A-Class into a proper AMG, and the A 35 is proof of its hard work. It’s hugely fast and incredibly adept, and it’s all backed up with a gorgeous interior. It certainly bodes well for the forthcoming A 45 flagship.

That flagship model is likely pack over 400bhp, but the A 35 we’re driving here develops just 302bhp from the same 2.0-litre turbocharged four-cylinder petrol engine as the A 250 – albeit with the addition of a twin-scroll turbo and a few chassis tweaks.

The A 35 may well be the cheapest way into the AMG world, but it’s no humdrum A-Class with a fancy badge. As we discovered with the original A 45 back in 2013, when the Affalterbach-based firm sticks its name on a hatchback, it’s a properly honed product with the DNA of its more famous V8-engined monsters. And the same is true with the new A 35. 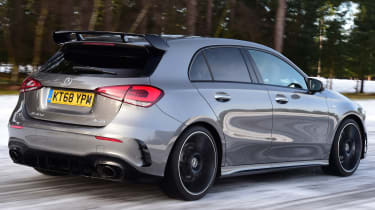 Mercedes-AMG has taken the rather stodgy and uninspiring A 250 and paid it some serious attention. The A 35’s rear subframe, for instance, is now solidly mounted to the body, and there’s hardly any suspension parts carried over – with new bushes, joints and lower wishbones. AMG has even fitted metal bearings on the lower front arms to give a more precise steering response. There are bracing bars and a new steering rack, too.

It’s quite an extensive mechanical overhaul then. Yet, on the outside – apart from the single-bar AMG grille and twin exhausts – the A 35 looks a lot like the lesser A 250. But you can turn things up a notch with the AMG Styling Pack (£2,595), adding 19-inch AMG multi-spoke alloys, tinted windows and a large rear wing.

No matter which you choose, you won’t be disappointed at how the A 35 drives. On first impressions the baby AMG delivers the kind of driving experience we’ve come to expect from expensive German hot hatchbacks over the past few years. It’s hugely adept in virtually every situation; its qualities shown in particularly sharp light on the icy, greasy and snow-covered Scottish roads of our test route.

The A 35 uses an electro-mechanical clutch on the rear axle for the four-wheel drive system (the old A 45 used a hydraulic one) and it’s the type of system that just works away in the background. It runs in front-wheel drive mode most of the time, but can shift 50 per cent of its power to the rear wheels in certain situations.

The drive modes comprise Slippery, Comfort, Sport and Sport+. Here, the four-wheel drive system and ESP set-up are placed in their most aggressive modes, using torque vectoring to aid cornering. The sports exhaust is in its most pantomime phase, too, with pops and crackles on overrun, bangs on upshift and enhanced engine noise in the cabin.

As such, the A 35 attacks corners ruthlessly with sharp turn-in and hardly an ounce of body-roll. The hugely impressive show it makes is all backed with surprisingly well-weighted and accurate steering, as well. The engine can be a little flat, however, and really needs to be extended towards the redline to get the most from it. Do that and it’s a hugely quick car; in the high rev ranges you realise how much work has gone into turning an A 250 into a proper AMG – and it’s mightily impressive. 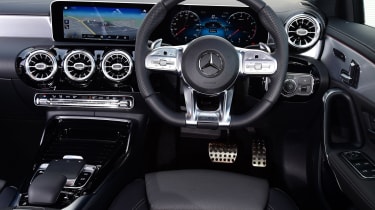 There are a couple of black marks though. A Volkswagen Golf R’s controls are slightly crisper and that car feels even lighter on its feet. The AMG’s seven-speed dual-clutch auto really has to be used in manual mode to get the best out of it, too. Drive the A 35 with some enthusiasm and you’ll discover the box is geared a little too heavily towards favourable fuel economy. Use the steering mounted paddles, though, and the box is quick to change and a good fit with the engine.

There’s a huge amount of tyre roar from the 19-inch wheels, which affects refinement on longer journeys, and the ride isn’t the best, either. Around town it’s too sharp, and even once up to speed it’s a little too fidgety. You can pay £695 for adaptive dampers but that seems a rather a lot on a hatchback costing as much as this.