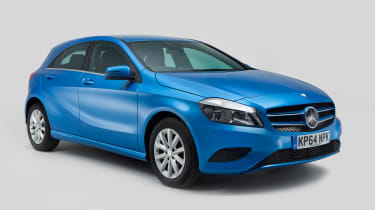 To see how much more popular the current A-Class is than previous versions, you only have to look in the classifieds. After just three years on the market, there are currently over 2,000 Mk3 examples on sale, but fewer than 1,000 of the Mk1 and Mk2 combined, even though they’ve been available for a total of 14 years. Buyers are clearly convinced by the car’s image, design and quality, yet if you want something that’s fun to drive, you’re likely to be disappointed – and that includes the fast A 45 AMG. Still, the baby Mercedes is safe, stylish and easy to live with.

When Mercedes launched the original A-Class in 1998, it came up with something new and unique. Here was a small family hatch with an elevated position for its seats that put all of the mechanicals under the occupants in the event of a crash.

The second-generation A-Class followed in 2005 and used the same formula, but the costly construction meant sales were hard to come by. As a result, Mercedes chose to go for a more conventional design with its 2012 Mk3 A-Class, which has sold in much greater numbers. It may be less distinctive, but there’s no denying that the hatch is still well worth a closer look.

The Mercedes A-Class was first produced in 1998 and now 18 years later it’s in its third generation. It’s this most recent model that we’re focusing on in this review. 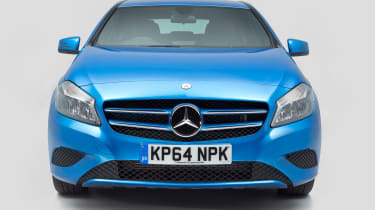 At the other end of the spectrum was the A 180 CDI Eco SE. Introduced in January 2014, it claimed CO2 emissions of only 92g/km. At the same time, the A 250 4MATIC arrived, with four-wheel drive.

A facelift in September 2015 brought new colours and materials, an A 220d 4MATIC option, an adjustable chassis (called Drive Select) and an A 180d option with claimed CO2 emissions of just 89g/km.

The petrol engines are nice to use, and while the diesels have more muscle, they’re not as refined as you’d expect. All units are available with the excellent and popular dual-clutch semi-automatic gearbox, yet the manual transmission works well, too. 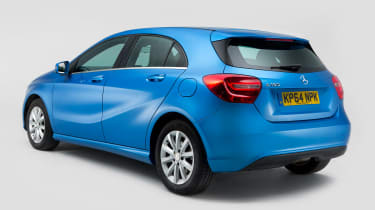 The entry-level A 180 only sits on steel wheels, but it has air-con and electric windows front and rear. The SE gets 16-inch alloys plus a multifunction steering wheel, sports seats and navigation. Sport models come with 17-inch rims and cruise control, while the AMG Sport has 18-inch wheels and run-flat tyres; all other derivatives get a tyre mobility kit. The Engineered by AMG car has 18-inch alloys, a bodykit, sports suspension, xenon lights and privacy glass.

Alternatives to the Mercedes A-Class Mk3

Audi’s A3 was the first premium small hatch to make a dent in the new car sales market, and it’s still a very desirable choice. Available in three or five-door (Sportback) guises, the A3 features efficient engines, excellent build quality and a smart cabin.

The BMW 1 Series shares all of the Audi’s attributes, but the power goes to the rear rather than the front wheels – although some A3s have four-wheel drive. The Volkswagen Golf is another posh small family car that’s very easy to recommend, as it’s good to drive, there are plenty to choose from and there’s a huge model range, too. Don’t overlook the Volvo V40, either; what it lacks in practicality it makes up for in safety. 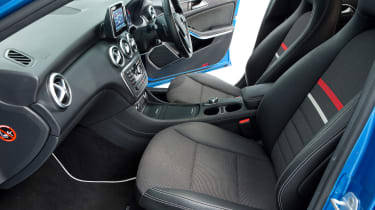 Some owners have complained about rattles, creaks and squeaks emanating from various sections of the dash. The centre console seems to be the main focus of this.

The seatbelt height adjusters, built into the A-pillars, have a tendency to rattle loudly on earlier cars; later models have a redesigned mechanism.

If you buy an A-Class without navigation, you can opt for an SD card for £200-£400 and simply slot it into the screen. You need to purchase the right card for your car.

Some A-Classes have run-flat tyres and some feature conventional rubber. If you plan to swap from one type to the other, make sure you keep your insurer fully informed. 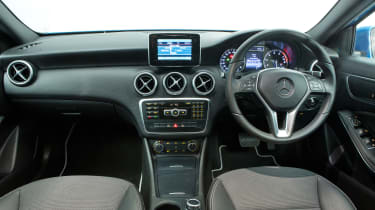 The cabin looks classy, but the build quality isn’t what you’d expect and the screen looks like an afterthought. Those in the front have it best, as back seat space is tight, while rear visibility is poor due to the small windows. The boot isn’t the biggest, either, at 340 litres with the rear seats up, or 1,157 litres with them folded.

All A-Classes need to be serviced every 12 months or 15,500 miles. Rates vary across the country, so it’s worth shopping around to save money. You can get quotes from any dealer at mymercedesservice.co.uk. Maintenance alternates between minor and major, priced at around £250 and £400 respectively for diesels, while work on petrol cars costs £240 and £340.

The big service is the fourth one, costing £700-£750, while brake fluid also has to be replaced every two years (at £120), although the coolant needs to be renewed only every 15 years. All A-Class engines are chain-driven so there’s no need to worry about replacing cambelts. 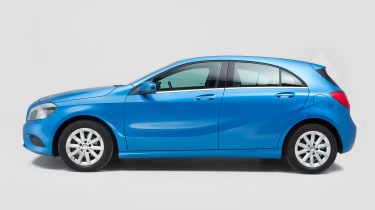 The first of seven recalls came in May 2013 due to airbags failing to work. After that the car was called back for faulty front seats (October 2013), engine oil leaks (January 2015) and a loss of drive due to faulty driveshafts (July 2015).

There were three further recalls after this, because of the front passenger airbag not deploying properly (August 2015), potential engine failure thanks to a manufacturing fault (November 2015) and most recently in January 2016 because of the possibility of fuel leaks leading to a fire.

The A-Class Mk3 came 119th on its Driver Power debut in 2015, before creeping up to 86th in this year’s satisfaction survey. Owners love the in-car tech (14th), seat comfort (25th) and ease of driving (30th), but lowly rankings of 147th for ride quality and 139th for practicality are disappointing.