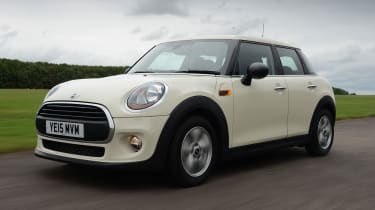 The MINI One is no longer the weak point of the range. With a new turbocharged petrol engine, it's more refined and punchy than you’d expect from a base model. It’s also efficient, but keen drivers would be better served avoiding some of the myriad options and spending £1,500 on the livelier Cooper. If you can live with the slightly awkward styling, we’d favour the five door’s extra flexibility, too.

As the current entry point into MINI ownership, the One has traditionally been overlooked by critics who dismissed it as too gutless for such a fine-handling car, favouring the warmer Cooper or hot Cooper S.

But to answer that, MINI has slotted a new 1.2-litre turbo petrol engine that brings extra punch, more flexibility and improved emissions. It’s essentially a smaller-capacity version of the 1.5-litre unit found in the Cooper, with 33bhp less as a result. While it impressed us as a three-door, will the added weight of this five-door make you wish you’d splashed out the extra on a Cooper? 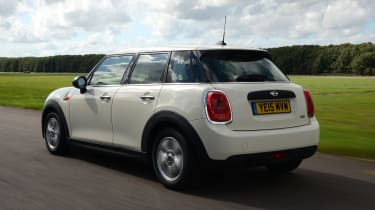 Fire it up and you’d be hard pushed to notice any difference from the Cooper. The 1.2 is hugely refined for a three-cylinder, with no noticeable vibration at idle. It pulls smoothly from 1,500rpm, with useful torque to make the most of the economy-biased long gear ratios.

It’s also silky smooth to rev out, with a pleasingly muted growl right to the redline. It even features the same rev-matching tech as the Cooper to ensure smoother downchanges. 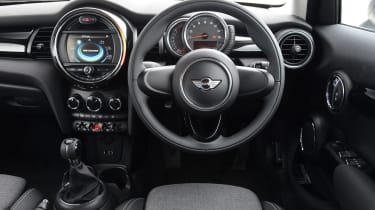 It’s a more pleasant drive than the old MINI One, but it’s still not all that quick. A 0-62mph time of 10.1 seconds is only 0.2 seconds down on the three-door model, but it isn’t quite enough to make the most of the One’s agile chassis. Overtaking requires a bit of planning, and considering the car’s emphasis on being fun-to-drive, you sometimes find yourself wishing for the Cooper’s extra lungs.

Official fuel economy is ever-so-slightly down on the 1.5 (58.9mpg vs 60.1mpg), though in real-world driving you’re unlikely to notice much difference. If anything the gap could prove even larger, due to the fact the 1.2 needs to be worked that bit harder to make decent progress. 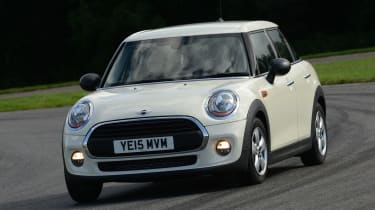 Nevertheless the One remains an entertaining drive, with very direct steering, an eager turn-in and minimal body roll. It rides better than it used to as well, although it’s far from soft and tyre roar is an issue at motorway speeds. The skinny eco tyres on our test car also lacked outright grip compared to the bigger wheels available from the options list. Inside you’d be hard pushed to notice any difference from the £1,500 more expensive Cooper. Granted, our test model came specced up with half-leather sports seats and the easy-to-use 6.5-inch central infotainment display, but even the standard car is classy, characterful and feels extremely well put-together. 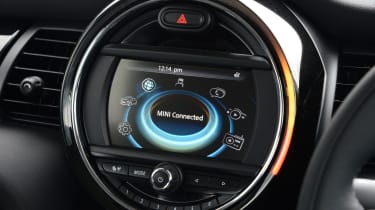 For just £600, we’d recommend adding the extra doors as it makes the MINI infinitely more flexible and doesn’t affect the dynamics.

The opening is quite narrow, but there’s 72mm more rear legroom and the larger 278-litre boot is on a par with more conventional supermini rivals. It’s no Honda Jazz, but it means the MINI can finally be considered by small families in need of extra space and practicality. 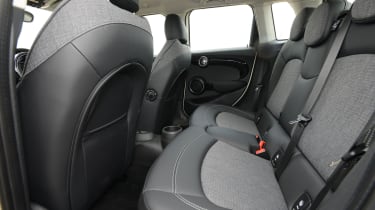 The only downside of the five-door layout is the slightly odd exterior proportions it brings, which combined with the plain white of our test car made it look frumpier than the sleeker three-door.