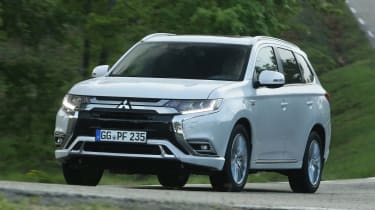 Having been for sale since late 2013, the Mitsubishi Outlander PHEV is something of a pioneer for plug-in hybrid technology. Like the Nissan Leaf, it stole a march on rivals by offering relatively affordable access to the technology, and came to market well ahead of any rivals.

With more plug-in hybrids now available, the Outlander PHEV was given a major update in 2018 to help it remain competitive against some strong competition, and not all of them are SUVs. The most direct rivals are the MINI Countryman Cooper S E PHEV and Kia Niro PHEV, as they're also crossovers, then there are plug-in hatchbacks like the Audi A3 e-tron and Volkswagen Golf GTE, Toyota Prius Plug-in and Hyundai Ioniq Plug-in Hybrid.

Like all of these models, the Outlander PHEV is a good choice for company car users, as its low emissions mean it has low Benefit In Kind tax rates when compared to diesel models.

As for SUV rivals, the Outlander's size puts it up against cars like the Honda CR-V and Toyota RAV4, both of which feature hybrid tech, but these are closed systems rather than plug-in. There's also hybrid versions of the Hyundai Tucson and Kia Sportage, but again these cars feature 48-volt technology, which is another closed hybrid system. Elsewhere, you're looking at diesel power, while rivals such as the Peugeot 5008 and Skoda Kodiaq offer seven seats as an option, as do non-hybrid versions of the Outlander.

From the outside, the PHEV looks largely the same as the standard Outlander, save for an extra flap on the rear bodywork to allow you to plug it in and charge the battery. But under the skin, the PHEV gets power from a petrol engine and an electric motor that's linked to a battery pack which offers drivers the chance to travel on electric power alone.

For 2018, the Outlander PHEV added a new engine, better electric motor and bigger battery to boost the car's appeal. The new 2.4-litre engine now makes 133bhp (compared to 119bhp for the old 2.0-litre) while the electric motor is up to 94bhp (from 81bhp). This means the Outlander PHEV is faster than before (0-62mph in 10.5 seconds, compared to 11 seconds for the old car), while the bigger lithium-ion battery under the passenger compartment boosts driving range in full-electric mode, up from 25 miles to 28 miles. That might not sound like much of an increase, but the new figure is taken from the latest WLTP tests, which are slightly tougher than before, and is a more realistic figure in the real world.

A range of other updates to the chassis, suspension and brakes are designed to improve the Outlander's overall driving experience, too.

One thing Mitsubishi couldn't change is the Outlander PHEV's pricing. Unfortunately, the scrapping of the Government's Plug-in Car Grant (PiCG) for hybrid models means the range now starts from around £35,800, which is nearly £7,000 more than the least expensive Outlander. The Outlander PHEV also no longer qualifies for road tax exemption - although it does get the hybrid discount at £140 - while models over £40,000 (which is three of the six currently on Mitsubishi's price list) cost £465 a year in road tax for years 2-6.

The range starts with the Verve trim, followed by Design, Dynamic and Exceed. There are also two Safety versions of the top two equipment levels, offering enhanced levels of kit.

The Mitsubishi Outlander PHEV capitalised on the demand for low emissions vehicles when it was first launched, but now that rival manufacturers have joined the fray, it has a far tougher task on its hands to wrest sales from a variety of talented rivals.

It's still a unique offering within its part of the SUV sector, thanks to its plug-in hybrid drive system, and that means it delivers super-low running costs, especially for business users. However, the petrol-electric drive system really is the Outlander PHEV's major selling point, because in all other respects it's not the most modern SUV, and it can't match rivals for quality or driving dynamics.

Hybrid drive works smoothly, but extra weight of batteries can be felt with the firm ride

Like all electrically assisted models, the Outlander PHEV starts up with a beep rather than a crank of the starter motor. And if you have a full charge in the batteries, then Mitsubishi claims that you can travel up to 28 miles on the electric motors alone. One option you have is to retain electric drive for later use - if you're going to be driving on the motorway and then in town, for example, then you can press a button on the dashboard that save the batteries for the urban section of your drive, where the energy will be better used.

Unfortunately there isn't a fun driving experience to be had with the update. The Outlander's steering is still light and numb, and while there's good grip, the car rolls into bends thanks to the extra weight of the batteries.

The single engine choice in the PHEV, which was introduced in 2018, is a 2.4-litre Atkinson Cycle petrol unit. This replaced the older Lancer Evo-sourced 2.0-litre MiVEC petrol, and it makes 133bhp. Combined with the two electric motors (one for the front axle, one for the rear, which has more power in the 2018 update) the PHEV now has a total combined output of 221bhp. That's a reasonable output and gives the Outlander PHEV a 0-62mph time of 10.5 seconds.

The Outlander PHEV is four-wheel drive, although power is only supplied to the rear wheels when the rear electric motor is running (there's no propshaft connecting the front and rear axles), and that also means that most of the time you're managing with less than the maximum output.

Low emissions benefit business users, while economy depends on how often you plug the PHEV into the mains

The headline economy and emissions figures for the Outlander PHEV make for interesting reading, with a WLTP-based CO2 output of 46g/km and economy of 139.7mpg. The latter figure won't mean much in everyday use, but when Auto Express ran an original Outlander PHEV, we could see significant gains in fuel efficiency when the car was plugged in to charge on a regular basis. Rely on the engine alone, and the weight of those batteries will really peg back efficiency and you likely won't get better than 40mpg. If you're not going to charge the PHEV up, then it makes more sense to opt for a hybrid or diesel rival.

Private buyers won't save as much money, in road tax at least. From April 2017, plug-in hybrids were no longer road tax exempt, and the Outlander PHEV costs £140 a year in road tax. However, higher spec models cost in excess of £40,000, so they are £465 a year to tax for five years after the first year of registration. After that, these models fall to the lower £140 rate.

The Outlander PHEV isn't a great car for depreciation, with experts suggesting it'll retain an average of 43% of its value over 3 years and 36,000 miles. In comparison, the Toyota RAV4 keeps around 52% of its original price over the same period. Initially, the Government Plug-in Car Grant and the attraction of free road tax and good economy meant the PHEV was more desirable. But, now that the road tax laws have changed and the Government’s Plug-in Car Grant has disappeared, it remains to be seen how values of the PHEV will be affected in the long term.

While the running gear is hi-tech, the cabin is looking rather dated in comparison

On the outside, the Outlander PHEV has a generic SUV shape, with a boxy design that is designed to follow function over form. The 2018 update added a new grille that's not quite as angular as the old design, but has more chrome trim than before. Other than that, it's business as usual, but as the Outlander design has been around since 2013, it's not the most cutting edge design.

There's a real 'Japanese' feel to the Outlander PHEV's interior, with numerous buttons and digital displays on the dash. There are plenty of hard plastics, nearly all of which are black, while the dashboard is festooned with switches that are also made of hard plastic. The dashboard is dominated by a large touchscreen, and features a stubby gear selector beneath it, while the instrument binnacle features a speedo and an energy meter, instead of a rev counter.

In between the two is a digital colour display that can be set to show energy flow between the drive systems. This can be controlled via the multifunction steering wheel, which also has controls for the cruise control, audio, phone and regenerative braking intensity.

Mitsubishi's nav system seems a little dated when compared to rivals. The latest version features Apple CarPlay and Android Auto for improved smartphone connectivity, but the clunky touchscreen and slow controls are a bit of a frustration.

As an SUV, the Outlander isn't the most spacious, but it's one of the roomier plug-in hybrids available

The Outlander PHEV has an advantage over a number of its plug-in hybrid rivals because it's quite practical. As it's based on the Outlander SUV body, there's plenty of space on offer to accommodate the hybrid drive system while still delivering good space for five people and their luggage inside. Boot space is good, although the back seats don't fold completely flat like they do in the standard Outlander.

However, when compared to other SUVs the Outlander PHEV isn't the most spacious SUV. It seats five, but the Kia Sorento and Hyundai Santa Fe are only marginally larger and have room for seven inside. What's more, the non-hybrid Outlander has the option of seven seats if that's something you're after.

If you're thinking of using the PHEV for towing, it's worth noting that the hybrid model has a 1,500kg maximum braked trailer towing capacity.

Mitsubishi has a credible reputation for building reliable cars, and the PHEV should be a strong performer

If there's one thing that Japanese car makers can be proud of, it's their reputation for reliability. Mitsubishi has a strong track record of building tough cars and SUVs - forged in part by success in rallying and off-road desert races - and the Outlander PHEV should be another strong contender.

The electrics and mechanicals are all tried and tested - the petrol engine is based on the same unit the firm used in its rally cars - while the hybrid drive system will have been extensively tested before being put into production. The 2015 and 2017 updates will have addressed any issues with the hybrid system before the addition of the new running gear in 2018, too, while Mitsubishi covers the hybrid battery for 100,000 miles. That's on top of the standard five-year/62,500-mile warranty that's standard with all Mitsubishi models. Service intervals for the PHEV are the same as they are for the diesel Outlander, too, at 12,500 miles or every 12 months.

The Outlander has a wide range of safety kit, a lot of which will beep at you to let you know it's working. Forward collision alert, brake assist, emergency braking and emergency stop assist are all included, while tyre pressure monitors and two Isofix seat mounts are fitted.