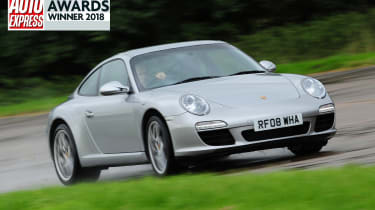 Even though you’ll have to look for a car from the previous decade to find a bargain, the 997-generation Porsche 911 is still a top buy for enthusiasts.

While all of the mainstream versions of the current 911 have some form of turbocharging, this 997 model benefits from a sonorous naturally aspirated flat-six motor. We’ve picked the Carrera S model here, and it comes with a sweet-shifting manual transmission. The 3.8-litre motor in this car produces 350bhp, which is more than enough to get your heart pumping when you rev the Porsche out to the red line. 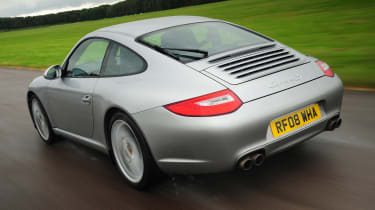 Considering buyers are paying huge sums for modern 911s with manual gearboxes, it’s incredible that you can pick up such a pure driver’s car for around £23,000. The engine and gearbox get the 911 off to a great start, but it’s the handling that will make this car a sure-fire future classic.

Well-weighted controls that serve up delicious feedback, a perfect driving position and an immersive, rear-engined, rear-wheel-drive handling balance mean the 911 is a joy to drive on a twisty road. But it remains comfortable and composed in all conditions, so it’s useable like few other sports cars at this level.

There are even two small rear seats, and while they’re not exactly comfortable they provide space for children or some extra luggage if needed. 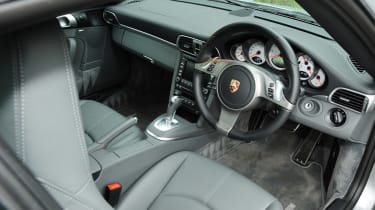 The design has barely aged in the decade since the used model we’ve picked was built. With the firm rarely making big changes to the 911’s looks, the 997-generation car still appears thoroughly modern 10 years later. Porsches hold their value very well and many have been looked after by very careful owners.

On the road: The 911 has true performance car power and handling in spades, but it’s usable every day.

Interior: Leather-clad cabin is focused around the driver, yet there’s even two small seats for children in the back.

Our selected 911’s age means BuyaCar.co.uk doesn’t offer PCP deals here, but you can pick one up on a lease for £668 per month.

This might seem pricey, but bear in mind that the 10 per cent deposit is relatively low for a premium performance machine, while the talent on offer here will make that number seem small compared to the amount of fun you’ll gain access to. 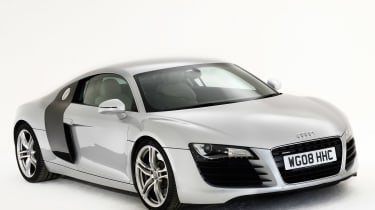 Up your budget to around £35,000 and you can get a mid-engined Audi R8. This price will buy an early V8 manual model, which we reckon is a peach. Its sharp handling, powerful engine and tactile open-gated box are all a sports car fan could want, while its supercar looks set the whole package off. 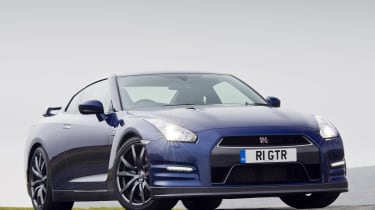 With the same £35,000 budget you could get into a Japanese performance icon. The Nissan GT-R was a revelation when it launched, with performance that shook up the supercar establishment; it still rivals performance models today. It’s brilliant to drive and incredibly fast, but its looks are a bit much for some and running costs are high.