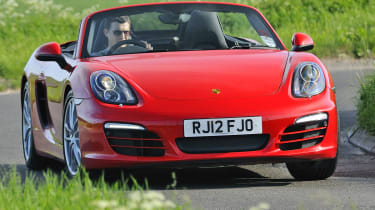 Porsche has only gone and done it again. The new Boxster ticks every single sports car box. While more expensive than rivals from Mercedes, BMW and Audi, in terms of desirability and drivability they pale in comparison. And don’t go thinking the base 2.7-litre engine is lacking, as its rev-hungry nature makes it the perfect choice for the enthusiast.

Since its introduction in 1996, the Porsche Boxster has often been touted as the best all-round sports car available. However, the latest version aims to move the game on with a new chassis, fresh engines and completely redesigned bodywork. But does it?

Video: Watch our video review of the Boxster S

Things get off to a good start. The new Boxster looks a lot more purposeful than its predecessors that you almost forget the car still has two useable boots – one front and another at the back. However, it’s the little touches, such as how the rear light clusters seamlessly flow into the spoiler, that really give it that previously lacking ‘wow’ factor.

It gets even better when you take the hood down. Unlike with the old car, you don’t have to manually unfasten the roof catch, as it’s now fully automated and the whole folding process takes just nine seconds. You can even operate the roof at speeds of up to 30mph, and with the top off, you get to fully appreciate the Boxster’s wonderful new cabin. Our car was fitted with optional full leather which costs more than £2,000. Yes, this seems steep, but it makes the car feel just as special inside as the 911 Cabriolet, which is about twice the price, so is a little easier to justify.

So the new Boxster is more stylish and more luxurious. But it’s also better to drive, too. Being longer, wider and lower than before means even better handling, while the perfectly balanced chassis delivers so much grip that unless you do something very wrong, it’s unlikely you’ll ever invoke the intervention of the extremely well judged traction control system.Some purists may baulk at the fact that, as with the 911, the new Boxster gets electric rather than hydraulic powersteering for the first time, but most buyers won’t notice, as it’s still satisfyingly meaty and mightily accurate.

Then there’s the engine. The entry-level Boxster is 200cc smaller than before, yet the new 261bhp 2.7-litre still pushes out 10bhp more than the old 2.9-litre. And while it’s not that punchy at lower revs, nor that tuneful, wind it past 4,500rpm and the little flat-six really comes on song, howling to the redline with sufficient thrust to convince you this baby of the range is still a proper Porsche.

The more you thrash the engine the better it gets, and the 2.7-litre Boxster actually makes a stronger case for itself than the more potent 3.4-litre S model as an enjoyable back-road blaster. And don’t be tempted by the PDK dual-clutch auto: the rev-hungry nature of the 2.7-litre engine demands the added involvement of the excellent six-speed manual.

What if you want to take it easy, though? Thankfully, as with all other modern Porsches, the Boxster acquits itself well as an everyday car. With the roof up it’s a surprisingly quiet cruising companion, the ride is surprisingly comfy for a sports car and you can pilot it around town just as easily as a Ford Fiesta.

Ultimately, it’s this perfect balance of fun, desirability and usability which leaves you in no doubt – the Porsche Boxster IS the best all-round sports car.