The Renault Captur is a small crossover that focuses on style, space and low running costs 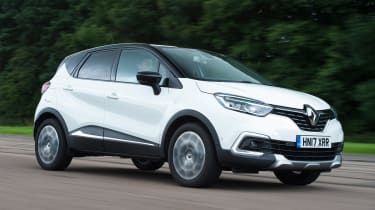 The Captur is an ideal compromise for those who find a Clio too cramped but aren't ready to step up to bigger cars like the Megane or Kadjar. However, while base model looks decent value, high-end trims are priced right up against cars in the class above, and the Captur can't compete with the cabin quality, tech or driver appeal offered in that sector.

Renault updated the Captur lightly for 2017, while the entire trim range was simplified in 2018. All cars share the same stylish looks, however, with a lightly tweaked nose and more premium materials inside – so you won’t feel too hard done by if you choose the basic model. There is a huge array of customisation options, too.

The Captur isn’t the most exciting car to drive, and the mid-life revisions do little to change that. But all things considered it’s competent, safe and comfortable enough. It's just a shame that the controls, such as the steering and gearbox, lack finesse. The engines are frugal and fairly smooth, but all fall behind rivals' for outright performance.

The Renault Captur is one of the French manufacturer’s most popular models – and with good reason. Based on the same platform as the Clio, the Captur sits higher and boasts more interior space. It’s a capable and competitively priced small SUV that does battle in a packed class that includes rivals like the SEAT Arona, Mazda CX-3 and the forthcoming Skoda Kamiq.

The Captur first went on sale in 2013, while an update was made in 2017 to help the Captur maintain its position in the market against a number of new arrivals. Since then, Renault revised the range again in 2018 to simplify the line-up. 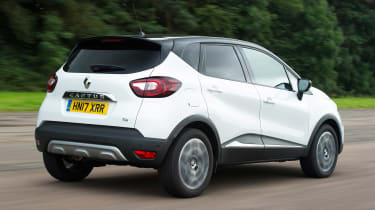 Under the skin, the Captur uses a platform that's common to the Clio and similar to the one found under the Nissan Juke. That means the Captur is front-wheel-drive only, and while Renault used to offer a switchable traction control system and all season tyres, this is no longer the case after the 2018 range refresh.

The update in 2018 also saw Expression+, Dynamique, Dynamique S, Iconic, Signature and Signature X models dropped in favour of a simplified model line-up. The Captur now comes in Play, Iconic and GT Line trims, plus the S Edition at the top of the range. One aspect of the Captur that hasn't changed is the amount of personalisation that's available, with different colour combinations for the body and roof, as well as matching trim for the interior.

There are three petrol engines and just one diesel to choose from, badged TCe and dCi respectively. The former comes with 89bhp, 128bhp or 148bhp, while the diesel gets 89bhp. Five and six-speed manual and six-speed automatic gearboxes are available depending on engine choice. 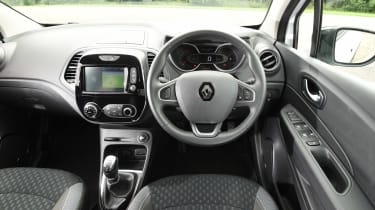 Prices for the revised Captur range start at around £15,800 and rise to just under £20,000. All cars are well equipped, while those prices put the Renault at the heart of the small crossover fight. The main rivals for the Captur include the Juke (which is smaller than the Captur inside), the Citroen C3 Aircross and Peugeot 2008 (which are roomier), Dacia Duster (more basic), SEAT Arona and Suzuki Ignis (sportier), Hyundai Kona and the Kia Stonic (arguably more style, definitely longer warranties). Also available are the Fiat 500X and Ford EcoSport and Vauxhall Crossland X.

For an alternative review of the latest Renault Captur SUV visit our sister site carbuyer.co.uk