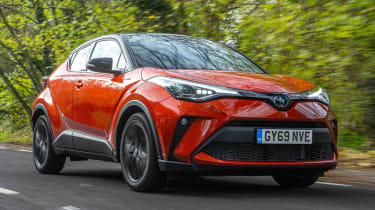 Toyota has gone for bold with the design of the C-HR. Not only does its blend of coupe styling cues and jacked-up suspension help it stand out in this class, it’s neat detailing also boosts its kerb appeal.

Heavily based on the C-HR concept that made its debut at the 2014 Paris Motor Show, the Toyota stands out from the compact crossover crowd. In fact, apart from the adoption of a five-door layout, the production version looks remarkably similar to the show star.

Like upmarket machines such as the BMW X6 and Mercedes GLE Coupe, the C-HR features a low roofline that gives it the rakish profile of a coupe. This illusion is heightened by the fact the  handles for the rear doors are hidden in the C-Pillars.

Yet it’s the Toyota’s daring combination of creases, curves and eye-catching angles that really grabs the attention. 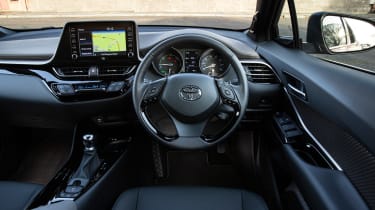 All versions get alloy wheels and distinctive LED running lamps, while Dynamic models stand out at night courtesy of their bright LED headlamps and tail lights.There are a number of optional paint colours to choose from, some of which are available with a contrasting black finish for the roof panel.

Climb aboard and it’s clear that Toyota hasn’t limited its bold approach to the exterior. The wraparound dashboard places the driver firmly at the centre of the action, while multiple shapes and textures give the interior a funky look. Neat details include the diamond pattern that’s repeated in the door trim, headlining, multi-function wheel buttons and climate controls.

Toyota has given the interior a lift courtesy of some coloured accents, including a smart dark brown upper dashboard on the Excel model, a dark purple upper dashboard and anodised blue deco line on the the Dynamic, and light blue ambient lighting on the front doors of all but the Icon trim level.

However, it’s the quality of the cabin that really grabs your attention. Soft touch plastics are used throughout, while gloss black inserts add a touch of class. As you’d expect from Toyota, everything is solidly screwed together.

Toyota updated the infotainment system in 2019 – with the Touch 2 media system featuring Apple CarPlay and Android Auto connectivity as standard. This makes a big difference, because it allows owners to bypass Toyota’s otherwise fiddly infotainment set-up, which is hindered further by the dated graphics and a poor layout.

In addition, all cars include Bluetooth, a DAB radio, a 4.2-inch TFT driver information display and a reversing camera.