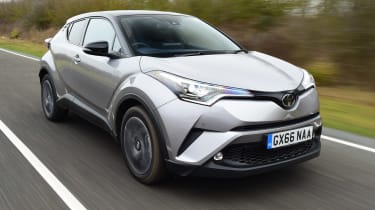 The bold looking C-HR looks all new on the surface, but delve a little deeper and you’ll find a tried and tested structure and mechanicals.

For instance, the C-HR is underpinned by the same platform as the recently launched fourth generation Prius. Light and strong, it not only helps sharpen the ride and handling, it provides a tough cage during a collision.

More importantly, the engines and gearboxes have all been lifted from other models in the Toyota line-up. The 1.8-litre petrol/electric hybrid unit is virtually identical to the recently revised set-up that debuted in the latest Prius, complete with its more efficient battery and clever combustion process that combines both Atkinson and Otto cycles. Despite the complexity of this set-up, it has proved to be extremely reliable.

In our 2019 Driver Power customer satisfaction survey, Toyota finished 10th on a list of 30 manufacturers, with Lexus sitting at the top of the table. While the C-HR itself came 19th out of the 100 cars that ranked.

The C-HR received a maximum five-star Euro NCAP safety rating in 2017, including an impressive 95 percent for adult occupants. Other scores were consistently good, including: 77 percent for child safety, 76 percent for pedestrian safety, and 78 percent for safety assist technologies.

Like all Toyota models, the C-HR comes with the brand’s five-year and 100,000 mile warranty. This lengthy guarantee brings greater peace of mind than many mainstream rivals’ policies, but still falls short of Kia’s seven-year cover, or Hyundai’s unlimited mileage policy.

However, unlike earlier hybrid models, there’s no extended warranty for the hybrid drivetrain and batteries – early Prius models were covered for up to eight years. That said, for an extra outlay you can guarantee the petrol/electric underpinnings for up to 11 years on an unlimited mileage deal.

If you’re a high mileage driver, then the C-HR’s relatively short service intervals of 10,000 miles are likely to be a little frustrating – many rivals will go twice as far between check-ups.

Toyota doesn’t offer prepaid service plans like many manufacturers, but its fixed deals mean that you shouldn’t pay through the nose for maintenance. Furthermore, Toyota finished second overall in our 2019 Driver Power dealer survey, with only 6.5% of owners reporting a problem with service.