As the only car on this list that has a mind of its own, the affectionately named Herbie stole millions of hearts when it was first seen on screens in 1968. 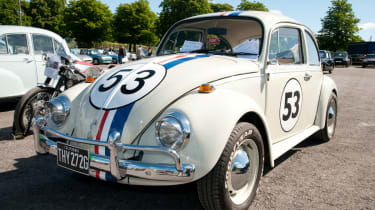 As the only car on this list that has a mind of its own, the affectionately named Herbie stole millions of hearts when it was first seen on screens in 1968. Not only does it have a mischievous personality, but it’s loyal, competitive and stubborn, too.

Finished in cream, with red, white and blue racing stripes, Herbie wins countless races, helps to stop a widow’s house from being demolished and it even falls in love with a Lancia Montecarlo. We last saw the love bug when Lindsay Lohan starred in Herbie: Fully Loaded – a reboot funded by Disney.

The VW Beetle, known as the Käfer in Germany, is one of the few cars in the world that almost anyone can recognise. The original design hardly changed from the its inception when a certain dictator wanted to create a “people’s car” for his country, up until the very last Beetle rolled off the Mexico production line in 2003.

The car had a particular boom during the sixties, as it, along with the VW Camper, became symbols of the ‘hippie’ movement. The Beetle is still used today as a taxi in Latin America, where you can find a huge number of wildly painted examples roaming the streets of Mexico City. Volkswagen has since revived the Beetle name, in order to keep the spirit alive and modern versions adhere to the basic shape of the original.