Four stars may seem surprising given VW’s back catalogue of Golf smash hits, but with no prices, specification details and no CO2 or MPG figures published for this 2.0 TDI, it’s fair. The signs are very promising though, thanks a smart new exterior look, a futuristic interior and refined driving manners. A UK test is crucial to determine whether the Golf is still the benchmark it’s been for the last three decades.

When you’ve got a bestseller that’s clocked up more than 35 million sales, you wouldn’t want to change the recipe that much when it comes to launching a new generation. And that’s the thing about the new Golf Mk8.

You see, while it may look different from some angles from the model it replaces, the styling is still Golf-like. The interior may be modern in look and some of the engines may well be new, but the platform on which the Mk8 Golf sits isn’t. As it has done for decades, the new Golf pulls-off the trick of being cleverly evolutionary.

We’ve already had our taste of one of those new engines. Called the eTSI, it’s a 148bhp 1.5-litre mild-hybrid petrol mated to a seven-speed DSG automatic gearbox that uses a 48-volt starter generator and a lithium-ion battery system designed to improve fuel consumption. When coasting the engine shuts off and the car glides in electric mode, and when accelerating the mild-hybrid system gives an extra 16bhp and 25Nm of electric boost. 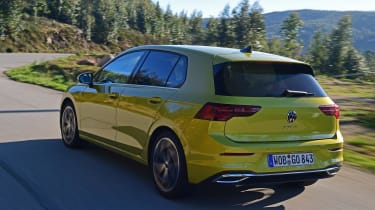 We found it to be punchy and quiet, and the switch between petrol and electric to be smooth. It’ll be available when the Golf launches in February, with a 128bhp version and a 108bhp 1.0-litre three-cylinder arriving later in the year.

Here we’re driving the 2.0-litre diesel with 148bhp, paired with a seven-speed DSG automatic – the only gearbox option for this engine. Volkswagen claims it’s an all-new engine developed ‘from scratch’ and, while it may not have the new-fangled mild-hybrid system of some of the other engines found in the new Golf, it’ll primarily interest high-mileage company car drivers (CO2 and MPG figures are yet to be revealed, however), as well as those who just want a more straightforward Golf.

From inside, the diesel starts up pretty quietly and even at tick over it’s hardly noisy. There’s 20Nm more torque than the old 148bhp 2.0-litre diesel could create but it’s difficult to feel the extra shove, mostly due to the majority of the torque still kicking in at 1,750rpm. It redlines at 4,500rpm just like the old one, too, but while it’s difficult to feel the difference between new and old, this is still a mightily impressive engine, largely on account of how smooth it is.

The seven-speed DSG helps here, and apart from the box’s typical tendency to hesitate from standstill or in slower corners, it works well with the engine for the most part. The TDI’s biggest appeal, however, is refinement as it’s surprisingly quiet when accelerating – something which can’t be said for the 1.5 eTSI – and very hushed when cruising at motorway speeds.

In fact, the whole car seems super sophisticated on the move. Apart from some noise kicked up from our model’s 18-inch alloys and a tiny amount of wind whistle around the wing mirrors, there’s an on-road refinement that makes the Golf seem far more plush than a Ford Focus or a Vauxhall Astra, and just as good as a Mazda 3 or a BMW 1 Series.

For the eighth-generation Golf, you can order Dynamic Chassis Control which now comes with an ‘Individual’ mode (along with Eco, Comfort and Sport modes), allowing you to tailor the steering weighting, engine response and the damper settings. ‘Comfort’ is the default choice but around town this adds a wooly, imprecise feel to the steering, while Sport firms up the suspension just a little too much for a non-sporty hatchback. Whether you select Sport or remain in Comfort, the Golf 8 does feel oh-so-slightly more agile than its predecessor, and carries on that longstanding Golf trait of being both enjoyable and comfortable to drive. 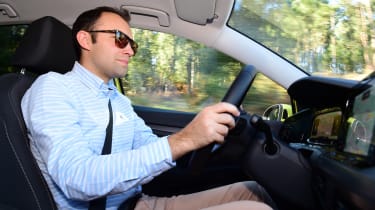 We haven’t driven a Golf 2.0 TDI with standard suspension – MacPherson struts at the front and multi-link at the rear – or indeed the entry-level 108bhp 1.0-litre, which ditches the multi-link at the back and relies on a more humble torsion beam. But judging by the old Golf and our Portuguese test route’s smooth roads, the general rule of thumb will probably apply – the larger the wheel size, the greater need for the adaptive dampers.

Those two different standard suspension set-ups of a rudimentary torsion bar for the lowly Golf and more a sophisticated multi-link for the posher versions, is a trick used by the Ford Focus and the Mercedes A-Class – and on the old Golf, too. That’s no surprise because behind the sharp new exterior and interior design, the Mk8 is a tweaked Mk7.5. It still uses the MQB platform, so the hard points remain the same, which explains why the Golf 8 is no larger than the Mk7.5.

That’s not strictly true as it’s a few millimeters longer, but essentially it’s the same size as the car it replaces, and the styling is rather similar too. There’s the same cab-backwards look, the boxy window-line and strongly kinked C-pillar just like the Mk1 of 1974. It’s only really at the front, with the new super-slim LED headlights that sit very low down into the bumper and the new VW logo, where the Mk8 is marked out. Park up an 8 with its predecessors, though, and there’s a fussiness to the styling not found in, say, a Mk4, 5, 6 or 7. 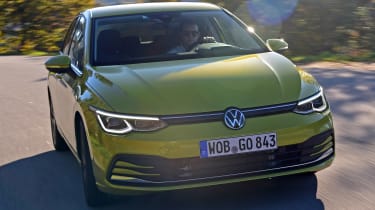 For those who thought the previous Golf suffered from an austere interior, then the Mk8 should fix that. The Mk7.5’s tall, sparse dashboard has been replaced with one that’s sleeker and more interesting to look at. All cars in the UK will get a 10-inch display for the dials and a 10.25-inch infotainment screen. Probably the most striking thing in this setup is the lack of physical buttons and knobs. Virtually every feature – from the headlights to the volume control – is touch-sensitive and, clearly to allay some potential criticism, there’s “Hello Volkswagen” voice control. New features also include Alexa, Car2X communication, wireless Apple CarPlay and a head-up display.

While the dashboard may look smart, it’s not without its faults. The new infotainment system looks super and is high customisable, but gone are the old Golf’s simple and intuitive layout and menus, and in comes a system that’s fiddly and will take time to learn. Moreover, while the Golf has always been the benchmark for quality, there are some cutbacks with the Mk8. The swathe of plastic across the centre of the dash feels rather too cheap, the soft-touch plastic on top of the front doors isn’t repeated on the rears, and a manual strut is used to prop up the bonnet rather than the old car’s gas struts.

Interior space is virtually identical to before, so there’s plenty of space up front, good headroom and, thanks to the mild-hybrid system’s battery pack placed under the passenger seat, the boot (380 litres with seats up and 1,237 seats down) remains average for the class.

What is surprising, however, is that UK cars will follow German trim level badging, so the basic model is simply called ‘Golf’, SE becomes ‘Life’ and ‘Style’ replaces SE L. R-Line carries on (as will GTE, GTD, GTI, GTI TCR and R) and while UK specs or prices haven’t been confirmed yet, standard kit should include LED headlights, keyless start and lane keep assist, with prices kicking off at around £20,500. This Style 2.0 TDI is likely to be pushing £29,000.