Is the seventh-generation VW Golf still the car to beat? We get behind the wheel to deliver our verdict 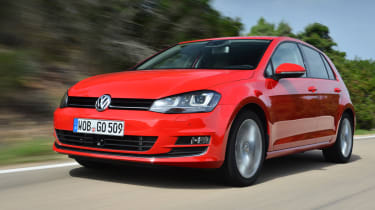 In isolation, the new Golf is predictably fantastic. In many ways, it’s the iPhone of the car world – it’s well designed and built and does everything you could ask of it. Its biggest test will come when it faces its sister cars – the good-looking SEAT Leon and plush Audi A3 – and our class current class leader, the BMW 1 Series. But from where we’re sitting, the Golf looks like a good bet.

If ever there was a test that should be a foregone conclusion, this is it. The current VW Golf is still competing at the top of its class (only in August, four years after its launch, did it lose its crown in a group test to the BMW 1 Series). And sales are showing no sign of slowing down: the Golf was the UK’s fourth best-selling car in the first half of 2012.

But this is the brand new Mk7 model, revealed at the Paris Motor Show, and the data suggests another giant leap forward. There’s more space for passengers and a bigger boot than before, it’s up to 100kg lighter and 23 per cent more fuel efficient, and thanks to a stronger body structure and a dazzling array of new technology, it’s safer than ever, too.

On paper the competition doesn’t stand a chance – but nothing can be taken for granted, and this new Golf will need to earn its stripes on the road like everyone else.

Let’s start with the styling. It’s still a conservative car to look at, but you wouldn’t expect VW to change a winning formula. Take in the details, though, and a much more taut, modern shape begins to emerge. The outlines of the headlights and tail-lamps are now all angles, instead of curves, giving the car a sinister rather than surprised look from the front.

Creases running down the bonnet and along the sides have been sharpened up, too. The new Golf is 56mm longer than before (with a 59mm longer wheelbase), plus 13mm wider and 28mm lower – unless you choose the 85g/km BlueMotion, due next summer, which drops the suspension a further 15mm. These are subtle changes, but the overall effect is 10 per cent less air resistance and a more dynamic stance.

There’s a cheaper (by around £650) and lighter (by around 20kg) three-door – previewed by the 217bhp GTI concept – which cuts a more dashing shape. But as 90 per cent of Golfs sold in the UK are expected to be five-doors, we’re focusing on this more practical version. And inside, designers have made the most of the Golf’s larger footprint.

Rear legroom is up 15mm, the front seats are mounted 20mm further back – important for taller drivers – and boot capacity is 30 litres bigger, at 380 litres. There’s certainly plenty of head, leg and shoulder room in the front and back, while seating three across the rear bench shouldn’t be a problem.

As you’d expect, the quality is exceptional. Details like the thin chrome trim around the air vents and glossy piano black plastic on the centre console and wheel give the whole car a lift, so it looks more interesting and feels more upmarket than before. Helping that is the eight-inch touchscreen, with clear graphics, a superb voice control function and a sensor that detects your finger moving towards the screen and brings up a range of options. Clever stuff.

By reducing production costs, the Golf now comes with more standard equipment for roughly the same price as the old car, and there’s some high-end options to choose from.

Adaptive cruise control is included on all SE trim cars and above, while a DAB radio and at least a 5.8-inch screen are fitted across the line-up. Options range from autobrake to lane keep assist and alloy wheels up to 18 inches in diameter.

Not including the BlueMotion and GTI, due next year, there are two petrol engines and two diesels at launch (see opposite). All have stop-start; we drove the 2.0 TDI, with a six-speed manual box.

How VW can produce an engine as effortlessly powerful and refined as this, while keeping CO2 down to 106g/km, is remarkable. Only five years ago, the original Golf BlueMotion did 0-62mph in 11.3 seconds, with 62.8mpg economy. This standard 2.0 TDI beats those figures by 2.7 seconds and 6.1mpg respectively. Now that’s progress.

Acceleration is strong and smooth, and it does a passable impression of a petrol engine, revving freely to the red line. The 1.6 TDI will be more popular, but if you’re a keen driver the 2.0-litre offers extra power for only a small cut in efficiency. Noise isolation inside is improved, too – open the door with the engine on, and close it again, and you realise just how well insulated the interior is.

A major change is the move to variable-ratio steering on all Golfs, to make low-speed manoeuvres easier and give a more direct feel at speed. The difference is barely detectable, but the Golf feels just as at home in town as it does on fast B-roads, where the weight reduction is most evident. There’s plenty of front-end bite and a natural balance in corners, which bodes well for the GTI.

A driver profile selection lets you choose between Eco, Sport, Normal and Individual modes (there’s also a Comfort mode if you add our car’s £800 Dynamic Chassis Control). Each setting alters throttle response and engine management. Plus, the suspension feels firmer in Sport mode, although it doesn’t spoil the well cushioned ride. And whichever setting you select, the Golf strikes a superb balance between comfort and control.