Volkswagen offers the Golf with new mild-hybrid tech, along with its usual blend of strong, refined petrol and diesel engines. 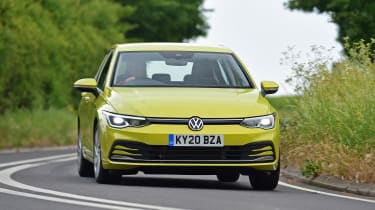 Underneath the subtly restyled exterior, the Mk8 Golf continues with much of its predecessor’s basic engineering. It uses the same MQB Evo platform, which means  the mechanicals are proven and well capable of delivering on the high expectations of customers.

The Golf uses a softer suspension set-up than the sportier SEAT Leon which helps to provide a more comfortable, relaxed ride. It’s not quite the engaging drive of a Ford Focus, but the Golf manages to handle bumps and imperfections with assurance, while not losing too much in the way of agility. It’s safely predictable to drive, which isn’t a bad thing - but there’s not too much fun to be had from behind the steering wheel. 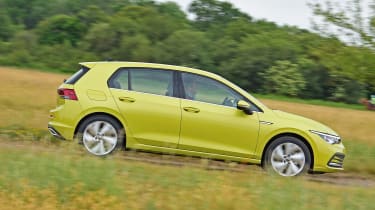 However, Volkswagen has at least attempted to inject some sparkle to the experience behind the wheel by fitting new cars with the XDS electronic differential lock which was first used on the Mk7 GTI. As a result, the car does feel keener to respond to steering inputs. However, when we tested the Golf on UK roads there was also some noticeable road noise in the cabin and a persistent drone from the four-cylinder petrol engine at higher-revs, which puts a dent in overall refinement once you’re travelling at speed.

In an attempt to find gains in economy and cleaner emissions, Volkswagen has introduced the GTE plug-in hybrid and eTSI mild-hybrid petrol versions to the Golf range. The eTSI variants have a brake energy recuperation function, which helps to save fuel and reduce emissions. The 48v system allows the petrol engine to switch off for short periods and coast while cruising, and also provides extra assistance for the engine when moving off at low speeds.

The engine line-up for the front-wheel-drive Golf includes the usual blend of TSI petrol and TDI diesel engines. The entry-level 1.0-litre three-cylinder petrol unit produces 109bhp and is available with a slick six-speed manual gearbox, delivering 0-62mph in 10.2s and a 126mph top speed.

The larger-capacity 1.5-litre petrol is offered with a choice of two power outputs - 128bhp and 148bhp, with respective 0-62mph times of 9.2s and 8.5s. Both make use of the six-speed manual transmission, while there’s also a 148bhp eTSI version, with mild-hybrid tech and a seven-speed DSG automatic ‘box. Cylinder deactivation, which shuts down two of the four cylinders when cruising, is also fitted, but you’ll hardly notice when this occurs as the system operates so seamlessly.

Performance from the GTE plug-in hybrid is pretty rapid, with the 0-62mph dash taking just 6.7s, while the GTI model is even quicker at 6.4s. Volkswagen hasn’t released official 0-62mph times for the 113bhp and 148bhp diesel versions, although it quotes a 7.1s sprint for the GTD model.