We get behind the wheel of VW's all-electric I.D. Buzz concept ahead of the planned production version in 2022 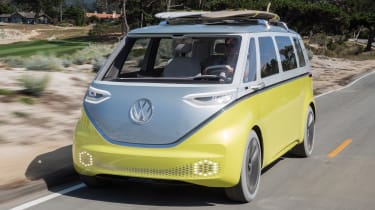 With its big interior and small footprint, the I.D. Buzz is even more versatile than the original – yet with its electric drivetrain and autonomous tech, it’s totally fit for the future. We’ll need to wait a little longer for the production car, but if VW sticks as close to the concept as the engineers and designers promise, it could be well worth the wait.

It took a little while, but after half-a-dozen failed attempts, Volkswagen has finally found a way to make the original Microbus fit for the future. Bosses are so convinced, in fact, they’ve confirmed the I.D. Buzz will make series production by 2022.

While customers will have to wait a little longer, Auto Express has already been given a taster behind the wheel of the all-electric Microbus at the exclusive Pebble Beach Concours d’Elegance in California.

But even if the I.D. Buzz draws more attention than many of the supercars that roll along along the waterfront at Monterey Car Week, some onlookers yawn and turn away – they’ve seen too many attempts to revive the legendary Microbus to really get excited. 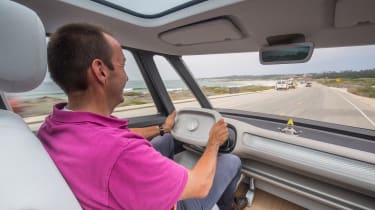 This time it’s different, though. The doors are opened by swiping along the sensor fields with an almost magic gesture, and as the electrically-assisted portholes swing wide, you’re invited to make yourself comfortable in the clean and lean cabin. There are very few buttons, but select D on the steering wheel and the Microbus takes off like every electric car: silent and incredibly fast.

The I.D. Buzz will be powered by the same electrical drivetrain and ‘chocolate bar’ batteries every other forthcoming I.D. model, and will be based on the same scalable MEB architecture. There will be a choice of rear or all-wheel drive, with power ranging from around 200bhp in the basic car, to almost 400bhp in the dual-motor model. That should allow the Microbus to accelerate from 0-62mph in less than five seconds, even if the top speed is limited to 100mph.

Naturally, the handcrafted showcar is far less dynamic as the fact sheets promises. The unusually slim and tall tyres on their 22-inch rims are a bit noisy and not very comfortable, and the turning circle is huge due to the 3.3-metre wheelbase. Bosses are talking about a rear wheel steering, however, which would make the production car immeasurably easier to drive around town.

But more impressive than any of this is the way that this futuristic Volkswagen van is closer to the historic Microbus than all the generations in between. It has the same unequaled ratio of size and space, as well as the same character, flexibility and versatility found on the original. It even has the engine in the back, just as the first car did in the 1950s.

Unfortunately, we weren’t able to test any of the I.D. Buzz’s autonomous technology, but the interior layout gives us an idea of what is to come. Put your finger on the VW logo for more than three seconds and the steering wheel will retract into the dashboard, for example, while another button gives you the freedom to swing your seat 180 degrees to face your passengers.

Ladies and gentlemen, the future is coming, but it’s closer to the past than we ever thought possible. 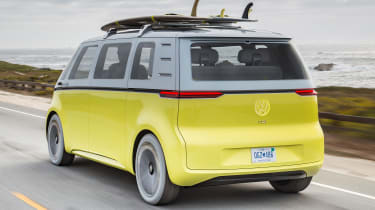 Click on the gallery above to see more of the Volkswagen I.D. Buzz concept...