Complex fuel cells and cars powered by hydrogen may be hot topics at the moment, but it's the diesel engine that's driving the immediate future of improvements to performance and economy. 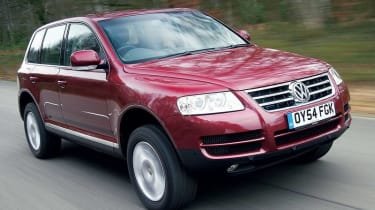 The Touareg may not be the first choice in this competitive sector, but with the new V6 TDI diesel, it offers style, capability and value for money. Easily a match for the V8 and, in the real world, as useful as the mighty oil-burning V10, this model will be the Touareg of choice for most drivers. Few rivals can fulfil as many different roles.

Complex fuel cells and cars powered by hydrogen may be hot topics at the moment, but it's the diesel engine that's driving the immediate future of improvements to performance and economy.

Which is exactly why Volkswagen has installed its modern 3.0-litre V6 TDI in the Touareg. Already powering Audi's A6 and A8, the six-cylinder unit makes its VW debut in the capable SUV, and instantly proves it's very well suited to the off-roader's abilities.

Developing 222bhp and 500Nm of torque, the engine transfers its power through a six-speed automatic transmission. Despite weighing more than two tonnes, the Touareg V6 TDI sprints from 0-60mph in only 9.9 seconds, and can reach 125mph.

It's only fractionally slower than the comparable V8 petrol model, yet the diesel offers average fuel economy of 25.9mpg - a useful improvement over the petrol's 19.1mpg. From a standing start, the Touareg TDI feels brisk, but it's the progress it makes between 30 and 70mph that's most impressive.

With a choice of sport and manual modes, the six-speed manual gearbox can be set up to suit any driving style, making the most of the V6's power and torque. The superb performance does not come at the expense of refinement, either. At low engine speeds, the TDI is very quiet, and even when extended it puts out a pleasing multi-cylinder roar, making for relaxing journeys.

The rest of the driving experience is also well suited to long-distance cruising. On standard steel suspension, the Touareg soaks up urban bumps and motorway undulations reasonably well, thanks to supple springs and dampers. It can suffer from unwanted body movements, but the off-roader remains surprisingly able and rarely feels as big as its dimensions suggest it should.

This conventional set-up comes a close second to the air-suspension optional on the VW, as it can't match the latter's adjustability. However, many buyers will find it more than adequate for most uses, and it also brings a £1,900 saving on the list price.

In town, the steering is light, although on motorways the wheel can be a little vague around the dead-ahead position, and a small degree of throttle lag is a reminder of the car's size and weight.

Head off-road, and the Touareg fulfils its 4x4 credentials. With permanent four-wheel drive, it delivers maximum traction in all conditions, while standard features such as a low-ratio gearbox, locking centre differential and traction control give it the ability to cope with the harshest of conditions.

The high ride and wide stance provide good stability in all circumstances, though, adding to the overall feeling of security. Whether on or off tarmac, the Touareg impresses with its ability to cope with passengers and luggage. Its cabin is not the biggest in class, but can carry five in comfort, while providing a tall if relatively short luggage area.

The cabin is also very luxurious, with wood and chrome trim, plus well laid-out dials and switches, giving the VW the feel of an executive saloon rather than that of a genuine 4x4.

There are also plenty of storage areas in the front and rear, making the interior practical as well as comfortable.

By adding this diesel engine to the line-up, VW has created a Touareg with a wide blend of abilities. It has enough performance for most needs, while still providing decent economy, and offers good value compared to other models.