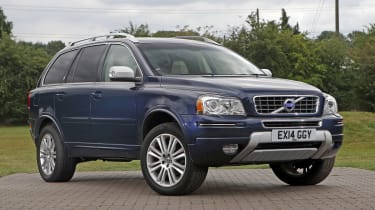 The Volvo XC90 has been overtaken by a raft of rivals since it was launched 15 years ago. Even so, if you need a seven-seat SUV the king-sized Volvo is still worth a look as it was kept fresh with regular updates. Buy the newest car you can afford, as these tend to have more efficient engines and better-resolved electronics, plus Volvo kept the XC90 competitive by loading it up with ever more kit and improved cabin ambience. Buying one of the cheaper XC90s on the market will prove a false economy: the running costs will be high relative to the purchase costs. Realistically, spend at least £10,000 to secure something that’ll provide years of pleasure as it earns its keep.

Road-biased SUVs were nothing new when Volvo introduced its first entry into the sector in 2002. What the Swedish brand did do was something that seems very obvious now, but which hadn’t been done before: the XC90 has a third row of flat-folding seats in its boot, making it a seven-seater 4x4. It’s a formula that’s now commonplace, but that doesn’t make the XC90 any less desirable – although if you’d like one of these 4x4s, there is plenty that you need to know before buying. 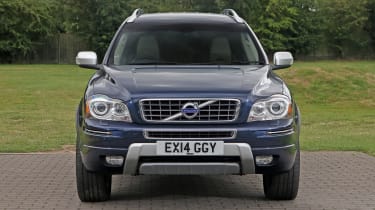 A facelift in summer 2006 meant an exterior refresh and better trim materials, plus a 4.4-litre petrol V8. At the same time, a 3.2-litre engine replaced the previous T6 unit. The R-Design of summer 2009 brought a sportier look, then from summer 2010 a 2.4-litre D5 with better economy was introduced.

By January 2011 there was a 197bhp 2.4 D5, while a year later another facelift brought LED tail-lamps, LED daytime running lights, reprofiled bumpers and an improved infotainment system. An all-new Mk2 XC90 was launched in 2014.

A petrol XC90 can make a lot of sense if you convert it to LPG; the V8 is a superb tow car. The diesels provide easy cruising and towing, especially when the Geartronic automatic gearbox is fitted. However, this transmission increases fuel consumption and can be hesitant off the mark. 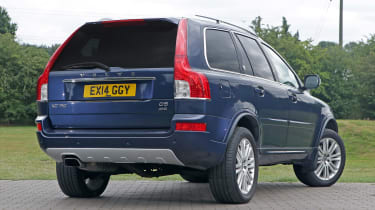 Alternatives to the Volvo XC90 Mk1

The Land Rover Discovery 3 and 4 are roomy, luxurious and highly accomplished rivals to the XC90. Purchase and running costs are high, but they’re the best 4x4s if carrying seven people is key. If you want seven seats but space isn’t so much of a priority, the Audi Q7 and Mercedes GL are worth a look. Beautifully built and very well equipped, the two German cars come with some excellent diesel engines and are great at towing.

The Mitsubishi Shogun can carry seven and is very good off-road, but it’s completely outclassed by the Volvo on-road and feels downmarket in comparison. Another great SUV that’s well built, well equipped and tows effortlessly is the VW Touareg; however, this comes with only five seats.

The tailgate release can stick when an actuation rod corrodes and swells. Fixing it is easy, but the luggage area trim panels have to be removed first. 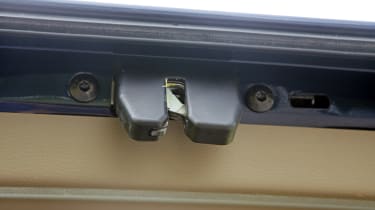 Check the state of all cabin trim, as this doesn’t always stand up well to family life. The leather upholstery can scuff, while the carpets can look tatty.

If you’re looking at a D5, try to start the car from cold. If it struggles to fire up, it’s probably because of injector problems; repairs tend to be costly.

Inspect the exterior brightwork to ensure it hasn’t gone cloudy; some chemicals in car washes can attack the metal. Replacement is the only cure.

The XC90’s dash design shows its age but the seats are superb, the cabin has a premium feel if you avoid early cars and individually adjustable sliding seats in the middle row give great versatility. Boot space is good at 615 litres with row three folded and 1,837 litres with row two folded also. 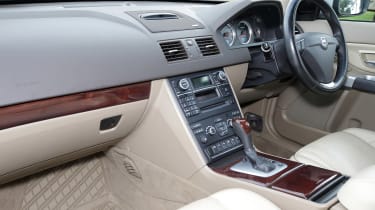 The XC90 needs servicing annually or every 18,000 miles, although when it was launched there was a 12k-mile limit, which has since been extended. Services alternate between minor and major, priced at £250 and £400 respectively. The sixth service (and also the 12th) is a big one costing £800, and includes a new timing belt, which needs replacing every 10 years or 108,000 miles.

Diesel and T6 petrol engines have a cambelt; other units (2.5T, 4.4 V8) are chain driven. Brake fluid needs changing every other service, but there’s no coolant schedule; it’s checked each service and changed as necessary.

A tally of 18 recalls might sound alarming, but Volvo issues recalls when others wouldn’t, and some of the XC90’s affected only six cars – although most involved thousands. The first came in October 2003 and the most recent in July 2015. Potential faults include issues with the ABS and seatbelts, along with injector fuel leaks, electrical glitches and steering failure. Other possibilities incorporate wheels working loose, power-steering leaks, engine stalls and the manual gearbox jamming.

The XC90 Mk1 last ranked in our Driver Power owner satisfaction poll in 2015, in 176th; predictable given its age. It came a strong 12th for practicality, but 185th for reliability shows you should buy with care.