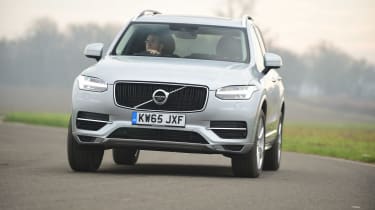 The XC90 T8 is a technological showcase for Volvo, and the way it drives hasn’t been compromised at all. But like other plug-ins, you’re only going to make the most of its efficiency by charging it from the mains. While it’s a superbly refined and comfortable luxury SUV, as soon as you start using the petrol engine, economy figures plummet. If you don’t have regular access to a plug, the D5 diesel is likely to be a more efficient choice.

The Volvo XC90 has already made an impact here at Auto Express. It earned our coveted Car of the Year award last year, and it’s the first in a range of new models that the brand is launching to propel itself to the top of the luxury car market.

While Volvo is renowned for its safety features, it’s also making a concerted effort to demonstrate its eco-friendly credentials. On top of introducing more efficient diesels across the range, it’s ventured into plug-in hybrids – first with the diesel-electric V60 Plug-In estate, and now with this: the XC90 T8 Twin Engine.

The new model is based on technology from the V60, but it has been refined and updated for the SUV. Power now comes from a 320bhp 2.0-litre turbocharged and supercharged petrol engine, instead of the V60’s diesel, and it’s joined by an 87bhp electric motor. These combine to deliver a claimed total output of 376bhp (factoring energy losses in the drivetrain), although a rotary selector on the centre console allows you to choose how you use the energy of the petrol-electric set-up.

The car runs in Hybrid mode by default, which automatically manages the energy stored in the battery and recharges through engine and road braking. You can also save the battery for later use, or recharge the pack on the move using the petrol engine to turn the beefed-up starter motor into a generator. However, doing this will see your fuel economy plummet, and it will only charge to around 30 per cent, too.

To maximise its potential, you need to plug the XC90 into a charging point. Volvo offers a range of options for buyers, whether they’re at home or at work, and has teamed up with charging specialist Pod Point to provide high-voltage charging. This can replenish the battery from flat in as little as two-and-a-half hours, although it will take longer via a standard 240V plug socket.

There’s an Eco mode that enables the car to run on electricity alone, and the brand claims that a fully charged battery will allow you to travel up to 25 miles in this setting.

At the other end of the spectrum, Power mode combines the petrol and electric motors for maximum performance, yet while Volvo claims a 0-62mph time of 5.3 seconds, the XC90’s high-riding stance and soft suspension mean it doesn’t feel that quick. Still, response is instant when you accelerate. Aside from the silent electric drive, the T8 performs exactly like any other XC90, so it’s plush and refined – geared towards comfortable driving rather than sporty handling.

The hybrid powerplant doesn’t compromise passenger space, either, making it the only full-size seven-seat plug-in hybrid SUV currently on sale. Even so, the system does eat into space normally taken up by the fuel tank in conventional XC90s, which makes for a smaller 50-litre capacity. This puts further emphasis on trying to charge the battery pack as often as possible.

And apart from some subtle T8 badging on the bootlid, the extra filler flap on the nearside front wing, a crystal gearlever and the Hybrid driving menu, the Twin Engine XC90 looks exactly the same as the rest of the SUV range.