Alfa Romeo and Nissan joined forces to create the Alfa Romeo Arna, and both should be ashamed of themselves 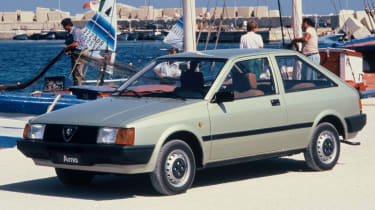 For as long as the car has been in existence, there has been collaboration between manufacturers. But few dalliances have been quite so short-sighted as to create the Alfa Romeo Arna.

The year was 1980, and historic Italian car maker Alfa Romeo needed a replacement for the successful Alfasud that could compete in the lucrative hatchback sector. Unfortunately, the state-owned Alfa had limited funds available, so there wasn't the resource to design a new car from scratch. So bosses decided a joint venture with Japanese firm Nissan was the way forward.

It was a controversial move, as the Japanese were viewed with suspicion by European car makers - they didn't want buyers to realise these Far Eastern models were more reliable than their own products - and governments across the region put restrictions on their sale; France banned the sale of Japanese cars completely for a while.

Nissan saw the Alfa Romeo partnership as a back door into Europe, and so Alfa Romeo Nissan Autoveicoli was born. With it came a brand-new factory near Naples, and its first model used an acronym of the company's name when it was launched in 1983, the Arna. With very little hindsight, it's obvious the two firms came up with a losing formula. The car was essentially the dull and dreary Nissan Cherry with an Alfa badge on the nose and the ageing flat-four engines from the Alfasud under the bonnet.

Not only did it look dull, but Nissans of the era had poor handling, which wasn't something befitting of a sporting brand like Alfa. And with Alfa Romeo engines and electronics under the bonnet, reliability wasn't a strong point, either. It was a formula that was completely backwards - if Alfa had taken charge of the styling and handling, while Nissan provided reliable running gear, it could've been a hit.

As it was, the Arna wasn't a threat to established European makers, and it torpedoed sales of Alfa Romeo across the continent. Only three years later, in 1986, the Italian government put state-owned Alfa up for sale. The Italian firm was snapped up by Fiat, who promptly canned the Arna and ripped up the Nissan agreement, probably hoping that the Japanese firm and its compatriots would quietly go away...