The all-new Audi A5 Cabriolet has arrived, but is the convertible fun to drive? 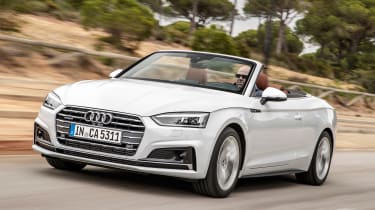 It might look similar from the outside, but the new Audi A5 Cabriolet is a marked improvement on the previous model. It’s more spacious and useable every day, quieter and more comfortable, plus it receives the same first-class cabin design as the coupe. It’s still not the last word in driver engagement, granted, but neither are its closest German rivals. On first impressions it has what it takes to give them a tough time.

If the Audi A5 is designed to be a more desirable alternative to an A4, then surely the convertible version is at the standard-bearer for that glamorous, showy image. The problem with the current A5 Cabriolet is that, despite a facelift a few years prior, it first went on sale a full nine years ago. To the fashion-conscious and technology obsessed modern motorist, nine years is a seriously long time.

Step forward the 2017 A5 Cabriolet, with a completely new platform, a fresh exterior, an overhauled cabin and Audi’s latest range of punchy and fuel-sipping powertrains. In theory, it’s just the recipe to remind BMW and Mercedes that they can’t have it all their own way for too long in this game. We’re driving the drop-top A5 for the first time in its predicted best-selling form, the 2.0 TDI 190 diesel, to see if it delivers in reality. 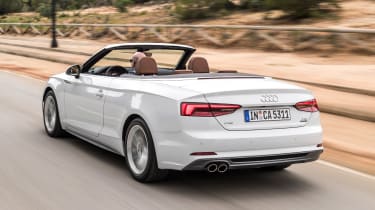 Whereas the original A5 Cabriolet was actually a significant design step for Audi, the new model is more about small styling refinements. The chunkier grille, stretched-back headlamps and wealth of body creases add some extra presence, but the basic shape is entirely familiar. That’s no bad thing, of course – it’s still a good-looking convertible, but the old A5 didn’t have to compete with such svelte models as the latest Mercedes C-Class Cabriolet.

The interior moves the game on in a much more obvious way. The dash is the same superbly built and cleanly laid-out affair as the hard-top A5’s, with, of course, the stunning Virtual Cockpit contrasting with the awkward-looking centre console screen. It remains the best cabin in this class in terms of usability and quality, however. 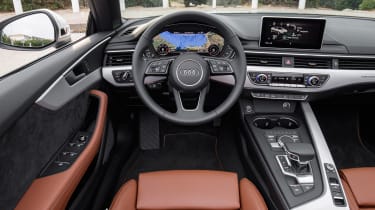 There are a couple of neat touches that are unique to the Cabriolet, including microphones in each front seatbelt to help make Bluetooth calls clearer with the top down, and an optional wind-deflector that stows away neatly beneath the boot floor. Audi has even borrowed the idea for Mercedes’ ‘Airscarf’ neck-heating system and offers its own version as an option for the A5.

The boot itself is a class-leading size, with Audi claiming 380-litres with the roof up and an impressive 320 litres with it down. Rear seat space is pretty good, too – legroom is markedly more generous than in the old A5 Cabrio, although headroom is limited compared with the coupe.

Audi makes a song and dance about the roof itself – a new, multi-layer job with multiple colour choices and acoustic panels to reduce wind noise. Our test in Spain was on a particularly windy day, so it’s difficult to reach a full conclusion on noise isolation, but the rustle only became intrusive at higher speeds. 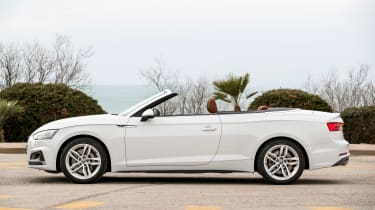 Roof down (and with the wind deflector up) it’s pretty easy to hold a conversation at motorway speeds. More impressive is the folding mechanism, which operates up to 31mph, opens in just 15 seconds and requires a mere touch of the button rather than the usual procedure of holding the switch down with one hand off the wheel.

There’s more revolution under the skin than outside. The new platform means the A5 Cabrio is 40kg lighter than the previous generation, but extra strengthening means Audi can claim it’s around 40 per cent stiffer than before. As a result it feels almost identical to the coupe 95 per cent of the time, with accurate but numb steering, decent body control and loads of grip thanks to the Quattro all-wheel drive system.

For the most part, it’s also a very comfortable car, particularly on the smaller wheels of our test model. However, there is more body movement noticeable in fast bends than in the hard-top A5, thanks to a slightly softer setup. Also, despite the claimed stiffness boost, Audi hasn’t totally eradicated body shake and shimmy over really rough roads and sharp potholes: like most four-seat convertibles at this price, it’s noticeable enough that keen drivers are still better served by the coupe.

Despite this, the A5 is a very strong choice for those dead set on a soft-top. Even this entry-level diesel, thanks to the lighter kerbweight, feels perfectly up to the job, providing strong mid-range performance and respectable claimed fuel economy of 60.1mpg. While it doesn’t exactly produce the aural delights of the 349bhp S5, at least the diesel drone settles down to a subdued hum whether the roof is up or down. In fact, if you can’t stretch to the excellent six-cylinder diesel, it’s probably our pick of the range.