In S Line trim with the 2.0-litre TDI engine, Audi's A5 Cabriolet offer low costs and a touch of class 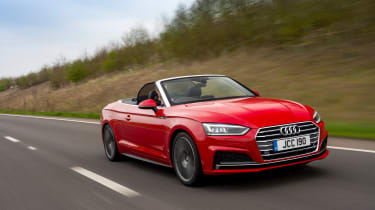 What the Audi A5 Cabriolet lacks in excitement, it more than makes up for in style, quality and refinement. It’s a relaxed top-down cruiser that offers desirability and low running costs in equal measure. The thought of a diesel drop-top needn’t leave you with a sour taste either, as the impressive multi-layer acoustic roof makes this one of the quietest convertibles on the market.

With the previous-generation A5, Audi bosses staggered the launch of the Sportback and Cabriolet models to allow the standard Coupe some space to breathe. This time around, however, they’re all coming at once.

The visually similar but mechanically overhauled A5 Coupe launched in the UK only late last year, before the Sportback found its way to showrooms in January. Less than three months later we’re sitting in the driver’s seat of the all-new convertible version to see if losing the roof makes this the A5 of choice.

Despite being heavier than the Coupe, the A5 Cabriolet Is 55kg lighter than before. That’s thanks in part to the VW Group’s tried and tested MLB platform, but also due to the extensive use of lightweight materials. Audi says this equates to an average 12 per cent drop in CO2 emissions, which in turn sees a marked improvement in fuel economy. 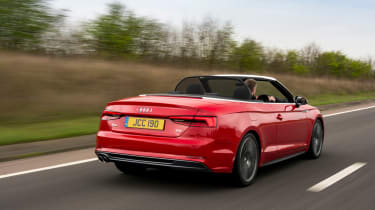 Our front-wheel-drive 2.0-litre TDI S tronic will return as much as 61.4mpg. The six-speed manual is slightly more economical, though cars fitted with quattro all-wheel-drive take a slight hit. It is only a slight one too, even the more powerful TFSI petrol model will do more than 50mpg.

The lower weight of this A5 Cabriolet also boosts agility, allegedly making the A5 more fun to drive. Yet while the Cabriolet is an excellent long-distance cruiser, it’s still no sports car. Our car had lots of grip, but the steering remains rather numb, and you don’t get the same rear-driven sensation as you do in a BMW 420d. The S tronic gearbox is as competent here as it is in the R8 supercar, and despite delivering lightning fast shifts, perfectly suits the car’s relaxed nature.

The three-layer acoustic roof is a masterpiece. Leave it in place and refinement is excellent, with very little in the way of wind or engine noise. There was noticeable tyre roar from our car’s optional 19-inch alloys, but the smaller standard rims are likely to be better at supressing any unwanted road noise. 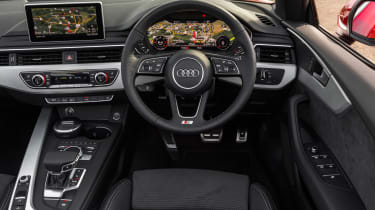 A car like this is best enjoyed with the roof stowed, however – and the A5 is among the best in the business when it comes to top-down motoring. The fabric top folds in just 15 seconds and at speeds of up to 31mph, and even without the (£300) optional wind deflector in place, buffeting is kept to a minimum. It allows the driver and passenger to hold a conversation without raising their voices, while the front seatbelts have in-built microphones for crystal clear hands-free phone calls.

The firm suspension feels a little fidgety around town, but it smoothes out nicely on the motorway for a more composed and comfortable ride. Our car came with Audi’s Adaptive Comfort Suspension, giving the ability to tune the dampers for a softer or sportier ride. But even in its stiffest settings the A5 can’t challenge the more nimble two-seat TT Roadster for driver thrills.

So what it lacks in outright dynamism it more than makes up for with its mature road manners. This is only heightened by the exquisite cabin and sumptuous front seats, which in top-spec S line cars come wrapped in leather and Alcantara. Audi’s excellent Virtual Cockpit is a worthwhile £250 option, adding a level of tech unseen on rivals at this price point. While a Mercedes C 220d Cabriolet is undeniably well built, the A5’s digital dash is a big step beyond.

You needn’t compromise when it comes to practicality, either. There’s a decent 380-litre boot, and there’s space in the back for adults on shorter journeys. The seats even fold 40:20:40 for added versatility, though it’s unlikely many owners will use their A5 for frequent trips to the tip.