The new BMW 1 Series has switched to front-wheel drive, but it feels more sophisticated than ever from behind the wheel 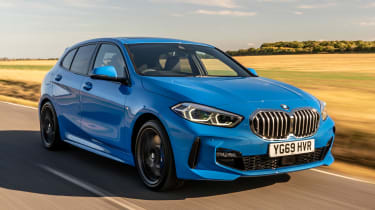 Those worried that the switch to front-wheel drive would detract from the BMW driving experience can rest easy: the 1 Series remains the most engaging car in its class. Firm ride aside, refinement is brilliant, too. However, despite the improved practicality, its competitors are still slightly roomier, particularly in the back. We’ll find out for sure when we pit it against its rivals soon, but this could be the new class leader.

This is the new BMW 1 Series: a car that seems, on the face of it, to be doing its darn hardest to upset the brand purists. Quite literally on its face, actually, if we're talking about the maker’s trend for ever-bigger grilles.

But arguably the change that puts the biggest bee in Munich fans’ figurative bonnets, in fact, is what’s occurring under its actual bonnet. Because the third-generation 1 Series has switched from rear to front-wheel drive. BMW reckons that despite the change, it drives with even more of the sportiness that BMW drivers expect. But is this true?

Under the skin, the latest 1 Series rides on the brand’s UKL2 platform. It’s not exclusive to this car; the BMW X1, X2 and 2 Series Active Tourer, all use the same architecture, plus a couple of MINIs, too. 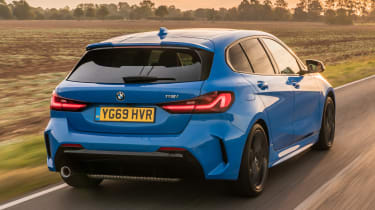 The powertrains, now mounted across the engine bay rather than from front to back as in the previous 1 Series, are familiar, too. There are three diesels to choose from: the 1.5-litre 116d, plus two 2.0-litre engines in the 118d and 120d. The entry-level 118i, which we’re drivng here, and the hot M135i which, with 302bhp, it’s the most powerful four-cylinder production BMW ever.

The 118i’s 1.5-litre three-cylinder unit is all the engine that most people will ever need. It makes 138bhp, power delivery is smooth, and below 4,000rpm it’s barely audible. According to the official WLTP testing procedure, it should manage 44.1mpg, too.

A six-speed manual gearbox is fitted as standard, but a seven-speed dual-clutch unit is a £1,350 option. It’s available with the 116d and 118i, and it matches the performance figures of the manual while dropping CO2 emissions ever so slightly.

It may miss out on one ratio to the excellent torque converter auto fitted to more powerful variants, but it doesn’t feel like an inferior relative. Shifts are barely perceptible in normal driving, while demand hard acceleration and it kicks down with a keenness that rival boxes can only dream of. Add that it’s perfectly agreeable during low speed manoeuvres, and this is by far the best example of a dual-clutch system at this, and indeed most, price points. BMW expects the manual to outsell the auto by roughly two to one, and this unit is precise and slick, too. 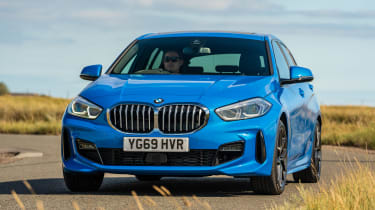 Onto the handling, then, and it’s also good news here. The 1 Series turns in keenly, grips strongly and resists body roll admirably. If we’re being nit-picky, it doesn’t quite deliver the beautiful balance of a rear-driven 3 Series, but it still feels far more engaging than anything else in this class.

All the more impressive, then, that it’s so refined, as well. Yes, the ride is firm – though it’s worth bearing in mind that we only sampled the 1 Series in its least yielding M Sport set-up and on the largest 18-inch wheels – but the quality of the damping means that the small, fidgety bumps are rounded off well. The noise suppression of bumps is first rate, too; the 1 Series has a ‘big car’ feel that other rivals can’t match.

The main reason for that rear-wheel drive has been ditched is to improve passenger and boot space, and it’s a definite improvement over its predecessor here. Boot space is up 20 litres (the 380-litre volume is identical to an Audi A3 and 10 litres up on a Mercedes A-Class), and the opening is bigger.

Getting into the back is easier than before thanks to a bigger opening, while both knee and headroom have increased by a couple of centimeters. However, each of its rivals are still more roomy, with headroom the most obvious issue. Kids will be fine, but anyone over six foot might find the roof a little too low.

While the dashboard doesn’t quite look as glitzy as an A-Class, build quality is flawless. Entry-level models get an 8.8-inch touchscreen and regular analogue dials, but the fanciest system replaces both with a pair of 10.25-inch displays. As ever, BMW’s infotainment set-up is intuitive to use and quick to load.

A head-up display is offered in a 1 Series for the first time, and now it’s even possible to unlock the car’s doors with a smartphone. Odd, though, that the only current compatible device is a Samsung Galaxy, yet the infotainment system continues to lack any support for Android Auto. 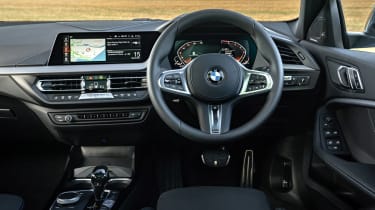 LED headlights and all-round parking sensors are fitted as standard to every 1 Series, while the M Sport model in these pictures adds a sporty body kit, 18-inch wheels, leather sports seats, ambient interior lighting and a dark headlining. Fleet users will be best suited to the SE: the smallest 16-inch wheels are fitted with low rolling resistance tyres in order to drop emissions by 9g/km over 18-inch shod versions.

With Audi’s A3 getting a little long in the tooth, the 118i’s toughest opposition comes from Mercedes and the tech-filled A180. Take out a PCP finance deal, and the Merc works out cheaper: based on a representative four-year deal and a £3,000 deposit, it costs roughy £317 per month to the BMW’s £332.

However, that premium seems modest when you consider that the 1 Series is faster, emits less CO2 and feels more sophisticated behind the wheel.