The 5 Series is bigger all round and is now a match for rivals on practicality.

Given that the BMW 5 Series has grown in nearly every external dimension, it’s no surprise to find its bigger inside. In fact, it now comfortably matches the Audi A6 and Mercedes E-Class for space, and edges ahead of the Jaguar XF.

Boot capacity has increased, too – although close class benchmarking means it offers no real advantage over its immediate rivals in this regard. Yet if buyers want more luggage space, then there’s always the 5 Series Touring estate version.

Access to the cabin is straightforward thanks to wide-opening doors, and once inside there’s bags of head and legroom for rear seat passengers. It’s a similar story up front, where the driver gets a wide range of seat and wheel adjustment. 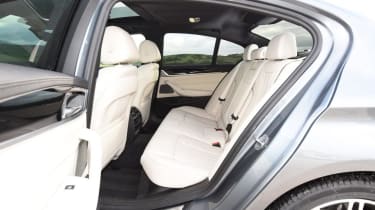 Like all BMW models, the driver’s seat can be set low, placing you at the heart of the action. The standard seats also offer plenty of support, particularly over long distances. M Sport models get more heavily bolstered sports items, which can be added to SE versions for an extra £475. Heated seats are standard for the front chairs and added to the rear bench for £325, while a ventilation function can be added for £510.

You’d expect an executive saloon to be roomy and comfortable – and the 5 Series doesn’t disappoint.

By stretching the whole car by 36mm, BMW engineers have liberated extra legroom, particularly for those sitting in the back. Here’s there’s enough space for even tall passengers to stretch out in comfort, while the rear bench is wide enough for three adults – although the large transmission tunnel means those sitting the middle don’t have much room for their feet.

Up front, the amount of space is equally generous. There’s also a wide range of seat adjustment, particularly for the driver. The chairs are also very comfortable, although adjustable lumbar support is a £225 extra. Powered operation is £895, while a massage function is available for £795

BMW has boosted the carrying capacity of the 5 Series, but the 10-litre increase to 530 litres isn’t much to write home about. What’s more, it trails the 540-litre figures claimed by the Mercedes E-Class and Jaguar XF.

Go for the 530e plug-in hybrid however, and you'll sacrifice 120 litres of space. That's a fair chunk, although the Mercedes E 350e suffers to a larger extent, losing 140 litres over its conventionally-powered petrol and diesel siblings.

Still, the load bay is reasonably well shaped in all versions, while the opening is wide. There is a pair of handy cubbies behind each wheel arch, plus some storage beneath the boot floor. The split/fold rear seat further aids versatility – although a load-through system will cost an extra £335. 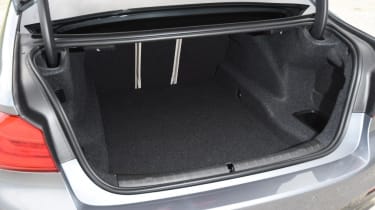 28
Go Back toInterior, design and technology
Continue ReadingReliability and Safety