Overall weight reduction means the BMW 5 Series is faster and better to drive than ever.

While the structure, bodyshell and interior are all-new, the BMW’s engine line-up features tried and tested petrol and diesel units. An appealing plug-in variant is also on offer, with a 31-mile electric range.

Whichever version you opt for, you’ll benefit from the same fine ride and handling balance. The 5 Series’s weight reduction has delivered improvements across the board, and despite exterior dimensions that are larger than the old car’s, the new version actually feels more agile on the move.

The steering isn’t as quick as the Jaguar XF’s, but it’s naturally weighted and delivers just the right amount of feedback. There’s also bags of grip, while even on the standard springs and dampers fitted to SE models the BMW delivers strong body control, coping very well over the bigger bumps.

Four-wheel drive is standard on the 540i and an option on 520d and 530d. The benefits in traction are obvious on the more powerful versions, but the 520d is best suited to the traditional rear-wheel drive layout, which feels a little lighter and more agile than the xDrive set-up. 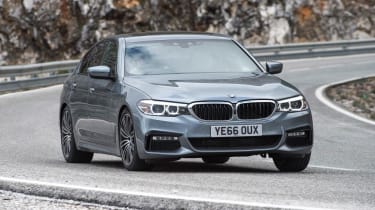 Agility can be further enhanced with the optional £995 Integral Active Steering set-up, which is available here with xDrive four-wheel drive for the first time. This electronically controlled system that turns the rear wheels in opposite direction to the fronts significantly boost manoeuvrability. At higher speeds the rears point the same way, sharpening turn-in and boosting stability.

However, if you select one option, then we’d recommend forking out £985 for the adaptive dampers. In its sportiest setting, this set-up gives sharper responses and even greater composure, while selecting Comfort serves-up a soft ride that rivals luxurious limousines.

The impression of luxury is enhanced by the low levels of noise in the cabin. Even the 520d’s four-cylinder diesel is hushed, while wind and road roar are barely perceptible.

For the first time ever in the UK, the 5 Series isn’t available with a manual gearbox – so if you want to shift ratios yourself you’ll need to look at an Audi A6 or Jaguar XF. However, the BMW’s standard eight-speed auto is so good that’d we’d have recommended spending extra on it if it was an option.

Forming the bulk of 5 Series sales in Britain will be the 520d, with its familiar 2.0-litre four-cylinder diesel. Producing 187bhp and 400Nm of torque, you might think it’d struggle in a car as big as the 5 Series. However, the new car is 100kg lighter than before, while the slick-shifting eight-speed automatic transmission means the 520d delivers as much performance as you’ll need.

BMW claims 0-62mph in just 7.5 seconds, which rivals warm hatchbacks for outright pace. Yet with a healthy 400Nm of torque you don’t need to work the 520d’s engine hard to make decent progress. The automatic gearbox delivers smooth changes when left to its own devices and crisp shifts when using the manual mode. The 2.0-litre unit is also smooth and refined, although this is partly down to excellent soundproofing.

In fact, for most of the time this engine is as unobtrusive as the bigger six-cylinder in the 530d. And while the 261bhp unit knocks nearly two seconds off the 520d’s 0-62mph claim with a time of 5.7 seconds, in the real world the differences aren’t as obvious as you’d think. 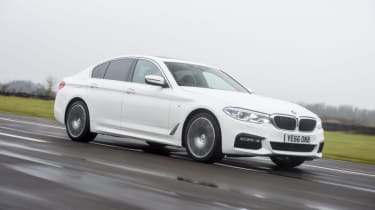 There’s more low-down muscle with the larger engine, while the deep growl under hard acceleration adds to the sporty appeal. Yet unless you want to have bragging rights when it comes to the Top Trumps performance statistics, the 520d’s more balanced mix of performance and efficiency makes it the more rounded choice.

The excellence of the diesels leaves the petrol models firmly in the shade; particularly the 530i, which offers no real performance or refinement advantage over the 520d and 530d. The 530e is an impressive alternative, though, driving very nearly as well as the petrol and diesel cars, with the added boon of its 31-mile zero emissions range.

The final model in the 5 Series range (before the flagship M5 arrives) is the 540i. It delivers near super saloon pace: with four-wheel drive traction and a healthy 335bhp, the big saloon will crack the benchmark 0-62mph in a claimed 4.8 seconds.