Apart from a brief spell of daring design in the early 2000s, BMW has always taken a cautionary and conservative approach to styling. And given the loyal customer base of the 5 Series, it’s no surprise the brand has played it safe with the latest model.

Its proportions are very similar to the old car, while the detailing around the headlamps and at the rear is pure 7 Series. The BMW isn’t as sleek as the Jaguar XF or quite as imposing as the Mercedes E-Class, but it’s handsome design that oozes understated class.

If you opt for the M Sport trim level, then a subtle bodykit, bespoke front and rear bumpers and larger 18-inch alloys give the car some racy kerb appeal.

The interior of the old 5 Series was starting to feel a little dated compared to rivals such as the Mercedes E-Class. There was nothing wrong with the quality of the materials or construction, but the design and infotainment were staring to look old hat. 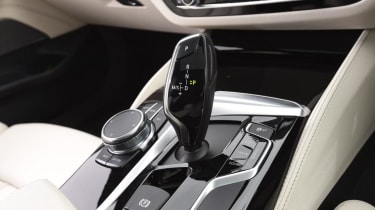 As a result, BMW has pulled out all the stops with this latest car, which takes its cues from the 7 Series flagship. In fact, from behind the wheel you could easily mistake the 5 Series for its larger brother.

The wrap-around dashboard is logically laid out, while the metal finished switchgear for the climate control is taken from the 7 Series. Also taken from the larger car is the large TFT display that replaces the traditional analogue dials.

As you’d expect, the fit and finish are first rate. Top-notch materials are used throughout, while the build quality is flawless. Few cars feel as thoroughly engineered from behind the wheel.

Like other models in the BMW range, it’s possible to customize the interior to suit you tastes. There are various leather trim options and different trim inserts, plus there’s the brand’s Individual programme, which provides a bespoke tailoring service – although you’ll need deep pockets for some of the options.

Technology plays a big part in the new BMW 5 Series, with features from the larger 7 Series trickling down to its smaller brother. For instance, the £965 Adaptive cruise control can be upgraded to include semi-autonomous driving with the £2,250 Driving Assistant Plus pack. This system allows the car to accelerate, brake and steer itself at speeds of up to 130mph. It will even change lanes to overtake on a motorway; simply flick the indicator on and sensors will identify a gap in the traffic, then pull smoothly out to pass the slower car.

You can also access the latest parking aids, with the usual parking sensors and camera joined by a remote set-up. It’s a £395 extra –although you have to order the £1,095 Parking Assistant Plus at the same time – it allows you to slot the car automatically into a tight space while you stand outside.

Other highlights include the £225 full colour head-up display, which features speed and sat-nav information, and the £1,595 night vision system – although apart from its pedestrian detection feature, this is a bit of a gimmick.

While BMW has been fairly restrained when it comes to styling updates, it has taken some big steps with the 5 Series’ infotainment. A larger screen, increased connectivity and gesture control all feature on the new system, while the familiar and intuitive iDrive controller is carried over. 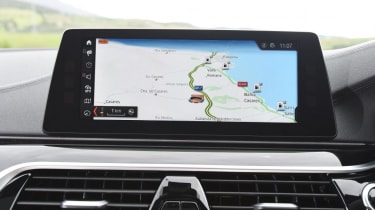 Plenty of tech in the 10.25-inch Professional Multimedia sat-nav is carried over from the 7 Series, just as it has been with the new 5 Series’ chassis. But more of it is optional on the exec than it is on the luxury saloon.

BMW is the first manufacturer to integrate wirelessly connected Apple CarPlay, although this costs £235, while the Connected app allows integration with Android smartphones. This will also send images from the car’s 3D view cameras to your mobile device if fitted. BMW Connected can even link with Amazon’s Alexa service for those using this tech. Online services are standard.

Other interesting features include Proactive Driving Assistant, which is linked to the sat-nav, allowing the car to select the right gear for the upcoming road layout.

Another feature is the £1,495 Technology Pack. This adds gesture control – which lets you perform tasks such as change the volume with the swish of a finger in front of the screen – plus wireless charging.

All versions of the 5 Series get BMW’s ConnectedDrive Services, which adds a host of online services. Emergency Call will contact help in the event of an accident, while the Online Services give you access to various apps and information. Also included in this package is the Real Time Traffic Information (RTTI), which uses up-to-the-minute data to display traffic flow.

Wireless charging of a smartphone can be added for £425, plus there are three separate hi-fi upgrades – £395 BMW Advanced, an £895 Harman Kardon and an eye-wateringly expensive £3,750 Bowers & Wilkins Diamond Surround sound system.