Ever since launching its Efficient Dynamics efficiency technology a decade or so ago, BMW has been leading the way for low running costs – and the new 5 Series is no exception.

If you're after a diesel model, it’s the 520d Efficient Dynamics that makes the most financial sense. CO2 emissions of 102g/km match those of the Mercedes E-Class and Jaguar XF, and place the BMW in the 22 percent tax bracket for the 2017/18 financial year. On top of that, the brand claims an impressive fuel return of 72.4mpg. Adding the xDrive four-wheel drive system increases emissions to 119g/km.

However, even the 530d delivers impressive low running costs, with claimed fuel efficiency of 60.1mpg and a CO2 figure of 124g/km. These figures change to 53.2mpg and 138g/km respectively on all-wheel drive machines.

As you’d expect, the petrol versions aren’t quite as efficient, but the 530i’s promises of 48.7mpg at the pumps and 132g/km of CO2 are good for such a big car powered by a four-cylinder engine. The 540i is the thirstiest model in the line-up, but even this is claimed to return just under 40mpg with emissions of 164g/km.

For company car users who do as much commuting as long trips, the 530e could be worth considering. The plug-in hybrid machine falls into the nine percent benefit in kind tax bracket thanks to its ultra low CO2 output of just 46g/km. Obviously, to get anywhere near the claimed 141.2mpg you’ll have to plug the car into charge frequently and make plenty of short journeys in the electric-only mode.

The 5 Series is a premium saloon that’s packed with technology, so it’s no surprise to find it falls into high insurance groupings. Lowest rating is the 520d, which fits into group 31, while at the other end of the scale is the 540i that attracts a grouping of 40. 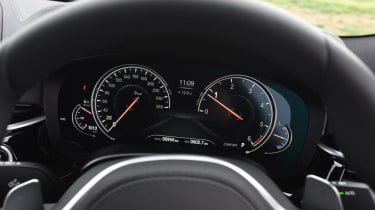 All the cars are fitted with a full suite of security measures, including a Thatcham category 1 rated alarm and immobiliser. BMW also offers its Trakstar service, which can locate your car in the event it is stolen.

Given the lure of the BMW’s premium appeal, it’s no surprise to find it retains its value well. What’s more impressive is that 5 Series resists depreciation almost as well as more fashionable upmarket SUV models.

Best of the bunch is the eco-friendly 530e plug-in hybrid, which our experts calculate will retain just over 50 per cent of its new value after three years.

The rest of the line-up performs almost as well, delivering a return on your investment of between 47 and 49 per cent. The exceptions are the 540i versions, which will hold onto just 43 per cent of their new price after 36 months.