Cutting edge safety kit is available on all models, while tried and tested mechanicals should prove reliable

The 5 Series ranked well in the 2018 Driver Power results, finishing 21st out of 75 cars. While BMW on the whole came a disappointing 21st out of 26 manufacturers.

Both the four and six-cylinder diesels featured in various forms in the old model, while the four-cylinder turbocharged petrol units debuted in the smaller 3 Series. Also familiar to other BMW owners will be the eight-speed automatic.

Even though the structure, interior and infotainment of the 5 Series are all new, the mechanicals have been thoroughly developed over the last decade or so.

Like all BMW models, the 5 Series has been engineered to be entertaining and engaging to drive. However, the car’s agile handling is backed up by a suite of safety systems, including stability control, autonomous emergency braking and adaptive LED brake lights that flash during an emergency stop. All versions also get powerful LED headlamps and six airbags.

Also included as standard is BMW’s ConnectedDrive Services, which can alert emergency services in the event of an accident.

If you want even more piece of mind, then the £895 Driving Assistant adds lane departure warning, rear cross traffic alert and traffic sign recognition, while the £2,250 Plus pack includes all this kit, but adds adaptive cruise control with steering and lane control. It also adds a function that stops the car if it senses you’re about to drive into oncoming traffic.

As with all BMW models, the 5 Series is backed by a three-year and unlimited mileage warranty. This guarantee also comes with breakdown recovery for the same period.

The 530e is covered under the same terms, apart from its battery pack that comes with a separate six-year warranty – although this has a mileage limit of 100,000. 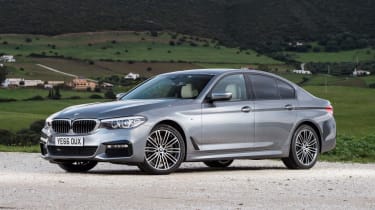 Paintwork on the car is guaranteed for three years, while any corrosion issues will be covered for 12 years.

BMW was one of the pioneers of the pre-paid servicing package, so it’s no surprise to find the 5 Series is available with a similar scheme.

Called Service Inclusive, it covers the first three scheduled trips to the dealer for just £399. This price covers the basic maintenance items, including oil changes and the air and ventilation filters. Petrol models are also treated to fresh spark plugs, while diesel machines are fitted with a new fuel filter.

As with all BMWs, the servicing schedule is variable based on the car’s use and mileage. However, the brand still recommends and annual check-up.