Is the French hot hatch still as exciting without a potent petrol unit? 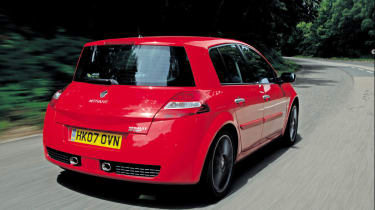 Whatever angle you view it from, the diesel-engined Renaultsport Mégane looks like a proper hot hatch. With its tiny foglamps and black air intakes, it’s menacing from the front. The side profile is great, helped by the smoked grey alloy wheels filling the arches, while at the rear, there are distinctive twin tailpipes and the signature Mégane plump bottom.

Our spy shots from Issue 967 revealed what the next Mégane will look like when it arrives in 2009, and it won’t be as dramatic as the current car from the rear. What the French model doesn’t carry on its rump, or indeed anywhere else on the bodywork, is a diesel badge. As soon as you press the starter button, though, you know there isn’t a petrol motor under the bonnet. It’s not that the 2.0-litre turbodiesel unit is unrefined – quite the opposite – it’s just that the power delivery is so different from that of other Renaultsport models.

To get the best from the hot Clio 197’s normally aspirated petrol engine, it has to be revved to 7,500rpm. By contrast, the diesel in this Mégane revs to only 5,000rpm. Indeed, there isn’t much point pushing it beyond 3,750rpm, as the maximum 360Nm of torque is produced at only 2,000rpm.

It’s a very different feel from a high-revving petrol hot hatch engine, and it isn’t as much fun or as exciting. But the diesel is effective, and although the Mégane’s 0-60mph time of 9.4 seconds isn’t earth-shattering, the trade-off is impressive in-gear punch. It covers 50-70mph in 8.7 seconds – that’s seven-tenths-of-a-second faster than the turbocharged petrol Mégane R230.

On a tight, twisty road, the Renault powers out of corners with real gusto. Its six-speed gearbox is slicker than the Toyota’s, and the clutch is smoother to operate. The Mégane’s brake pedal feels more involving, but the Auris’s anchors are the stronger of the pair, bringing the car to a halt from 70mph in 48.9 metres, compared with 49.9 metres for the French machine.

Yet while the Toyota leaves you feeling rather uninvolved, the Renault’s steering really lets you know what the front wheels are doing. And although the Mégane is by no means free from body roll, it’s kept to a minimum, and the hatch turns into corners with a keenness that the Auris never comes close to matching.

It’s a genuinely good driver’s car – but that’s not to say it’s perfect. During hard cornering, the weight of the Renault’s engine means the front end feels slightly soft. At the other end of the scale, less enthusiastic drivers may find the firm suspension a bit uncomfortable around town.

Considering the Renaultsport Mégane looks so smart outside, it’s a shame there aren’t a few more sporty touches inside. True, the seats do a better job of holding the driver in place than those in the Toyota, and you get a wider range of adjustment. But there’s nothing exciting to look at. Red stitching on top of the steering wheel indicates the straight-ahead position, yet the plastic-surrounded instrument dials are ordinary. Overall, the interior doesn’t look particularly fresh, although the quality of the plastics is pretty much as good as the Toyota’s.

At £19,450, the Renaultsport Mégane is £655 more than the £18,795 Auris. It’s also marginally thirstier and has slightly higher annual tax bills. But this is balanced out by the fact that the dCi 175 sits in a lower insurance group.

Price: £21,050Chart position: 1WHY: Arriving in dealers now, the Mégane is designed to blend sporty handling with excellent economy

These cars are closely matched in terms of official economy, and our returns reflected this. The Mégane gave 35.4mpg – that’s less than the Toyota. But a larger fuel tank means a 467-mile range.

Our experts predict that the hot diesel Mégane will retain only 34.8 per cent of its price over three years. This is nearly 10 per cent down on the Auris, and translates into a figure of £6,769.

The Renault’s 172g/km CO2 output is 8g/km higher than the Auris’s, and it sits in the 24 per cent bracket. That means lower-rate earners shell out £1,027 a year in company car tax.