The underpinnings from the Toyota Aygo make their way into its French siblings – the Citroen C1 and Peugeot 108. 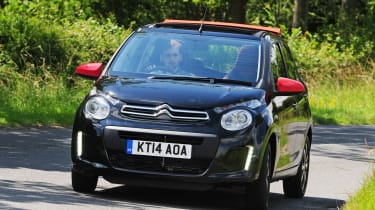 The C1 and 108 have smoother, cleaner styling than the Aygo, without the crazy angles that make that car so divisive. That’s not to say they’re dull – Peugeot’s corporate face fits nicely onto the 108, while Citroen’s trademark upside-down headlight arrangement gives the C1 a look all its own.

Both cars are available with Toyota’s 1.0-litre three-cylinder petrol, but unlike the Toyota they can be had with a more powerful, 1.2-litre turbocharged unit as well. This isn’t as smooth an engine as the 1.0-litre, but that’s worth putting up with, as it makes these two cars far better motorway companions than most in this class.

Elsewhere, the cabins are broadly the same as the Aygo – which means the same mix of interesting styling features with slightly cheap construction. There’s also a similar lack of room in the back seats, even on five-door versions – though the boot on these cars is slightly bigger than that in the Aygo.

Another feature sure to win people over is the optional full-length fabric sunroof – a great addition for almost-convertible motoring. Still, lack of space and refinement means these cars are left floundering behind the leaders in this class.