Premium French supermini gets a hot-hatch makeover, but can it justify its hefty pricetag? 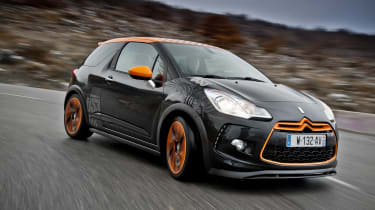 If you’re after a hardcore racer then you’ll be disappointed with the Citroen DS3 Racing. Look at the bigger picture though and you’ll find a car that is hard not to love. Thanks to the changes made by Citroen Racing the flagship DS3 delivers an involving driving experience backed up by impressive refinement and true everyday usability. Low Co2, high economy figures, guaranteed rarity and distinctive looks ensure the only thing that might leave a bitter taste is the relatively exclusive pricetag.

Developed by the same team that looks after Sebastien Loeb’s rally cars, you would expect the new Citroen DS3 Racing to be more hardcore hatch than civilised supermini.

But if ever there was a model that could be likened to Dr Jekyll and Mr Hyde, this is it. Auto Express was the first to see if Citroen’s smoking new hatch could live up to the hype.

However, instead of a stripped-out interior, the car retains the sound deadening found in other models, plenty of standard kit, comfortable rear seats and a usable boot for the weekly shop.

Under the bonnet, the 1.6-litre engine produces a VW Golf GTI-matching 204bhp, and the result is a car that sprints from 0-62mph in 6.5 seconds and keeps on accelerating until 146mph. The good news is that despite all the power being sent through the front wheels, there is a distinct lack of torque steer or wheelspin, even in damp conditions.

It’s largely thanks to the flat torque curve, which means the peak figure of 275Nm is available from 2,000rpm to 4,500rpm. The power delivery is so smooth you often feel the Racing lacks the sense of urgency it deserves, although a glance at the speedometer soon confirms you’re travelling faster than you thought.

All that speed can be carried through corners as well, thanks to impressive grip from the front end and superb body control. Eventually it will wash wide with understeer, but a brief lift of the throttle soon sees the nose tuck back in towards the apex – a trick the Renaultsport Clio has been master of for so many years. The recalibrated electronic stability control will also allow some degree of slip before it intervenes, so it’s easy to have fun with it still active, although it can be fully disabled for track use.

The brake discs are 40mm larger than standard and clamped by Brembo calipers, and there’s plenty of feel through the pedal. Feedback from the retuned steering inspires confidence, although the wheel will be too light for some. But the biggest revelation is the suspension.

Despite the 18-inch alloy wheels – which actually look like 19-inchers due to the rim overlapping the rubber – the ride is firm, but more supple than on any other car in this class.

Add impressive refinement at motorway speeds, low CO2 emissions of 149g/km and combined fuel economy of 44.1mpg, and it’s hard not to be impressed. Those in the front sit on soft but supportive bucket seats, while much of the cabin is trimmed in carbon fibre that both looks and feels great.

There are only two options – sat-nav (£800) and the graphics found inside and out (£450) – and buyers can choose between two paint colours. If you want to stand out, there’s the Obsidian Black with Sport Orange seen here, or you can choose the more subtle Polar White with Carbon Grey trim.

If there is any criticism of the DS3 Racing, besides its high £23,100 price, it is simply that it’s too good an all-rounder. Citroen has missed a trick not producing a focused flagship with less weight and sharper dynamics befitting of the Racing badge.

However, advanced orders mean over half of the 200 UK allocation have already been sold, so it would appear Citroen has little to worry about.