While the looks are an acquired taste, there's no arguing with the Honda Civic Type R's ability 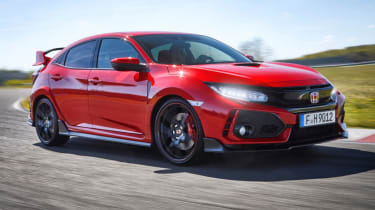 The name Type R strikes a chord with hot hatch fans across the world, and the latest Civic Type R is at the cutting edge of hot hatch tech. It doesn't seem that long ago that the last Type R was launched, and that's because it was so long in development. This time around, the Type R followed hot on the heels of the standard Civic hatchback to cash-in on sales as soon as possible.

Under the skin, the latest Civic Type R shares much with the last model. It has the same 2.0-litre turbo VTEC engine, front-wheel drive and six-speed manual gearbox, while the chassis has been honed to deliver an even sharper drive.

Proof of that can be seen in the car's Nurburgring lap record, which shaved seven seconds off the time set by its predecessor.

The Civic Type R is one of the sharpest handling hot hatches on sale. With 316bhp on tap and pricing starting from around £31,500, it’s difficult to go faster for less.