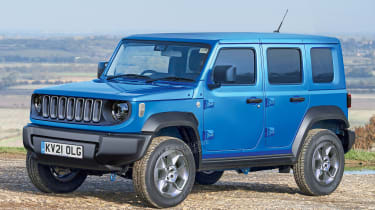 Jeep has wasted no time in making use of the new partnership between FCA and PSA by starting development on a new ‘ultra-compact’ SUV that will be pitched as a more rugged alternative to the likes of the Nissan Juke and Volkswagen T-Cross. And Auto Express can reveal that it’s going to be offered as a fully electric vehicle, too.

Senior Jeep officials have confirmed to us that the as-yet-unnamed model will be in showrooms by 2022. The small SUV is being developed with European markets in mind, because the segment is one of the fastest growing in a region where Jeep still sees significant scope for higher sales.

When quizzed about the vehicle’s brief and styling, Marco Pigozzi, Jeep’s European Head of Brand Marketing, said the crossover would offer plenty of day-to-day practicality, but without compromising Jeep’s renowned off-road capability. “The car will be able to be used as a bad-ass Jeep, but it has also been designed to be used every day,” Pigozzi told us. 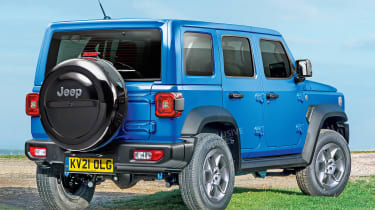 Previewed by our exclusive images, the forthcoming baby SUV will be around four metres in length – which will make it slightly longer than a Suzuki Jimny, but a few millimetres shorter than the recently-launched Juke. It will retain Jeep’s chunky styling cues and boxy proportions.

Given Jeep’s recent push towards electrification (starting with the launch of plug-in hybrid versions of the Renegade and Compass), it’s almost certain that the brand’s new small crossover will feature some form of battery power. When asked about the possibility of electric drive, Pigozzi stated: “We have the capability to deliver the electrification we need.”

That’s a strong hint that the car is almost certain to adopt the Common Modular Platform (CMP) architecture used for the Peugeot 2008 and DS 3 Crossback, among others. As well as being able to accommodate petrol and diesel power, the platform can also feature fully electric drive with a range of up to 211 miles on a single charge.

Jeep’s short-term electrification strategy was sparked by the recent launch of the plug-in hybrid Renegade and Compass, both of which use a turbocharged 1.3-litre four-cylinder petrol engine, a compact lithium-ion battery pack and an electric motor mounted on the rear axle. The system produces 187bhp and 237Nm of torque, and will give both models a claimed maximum all-electric range of around 31 miles.

Pigozzi outlined to us the benefits of electric motors when driving off road. “The move from mechanical to ‘e’ all-wheel-drive is a massive improvement – it’s more capable than a conventionally powered Jeep,” he said. “The enormous torque on offer from the electric motor allows [the car] to easily crawl over rocks and obstacles. And the fact that it’s mounted on the rear axle means [the car] is pushed up hills rather than pulled.”

Jeep’s rapid shift to electrification, with its forthcoming range of all-electric and plug-in hybrid models, should help the brand pull its average emissions below the forthcoming EU-regulated range average target of 95g/km, which is being phased in this year and will come into force by 2021.

What do you think of our exclusive baby Jeep SUV images? Let us know your thoughts below...

Plug-in hybrid Jeeps will be on sale soon, and new boss Christian Meunier tells us what’s so exciting about them
Jeep Renegade and Compass 4xe First Edition PHEVs on the way 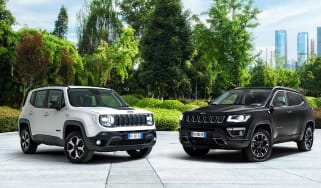