We get behind the wheel of the cleanest Kia Rio on sale, that promises 88mpg 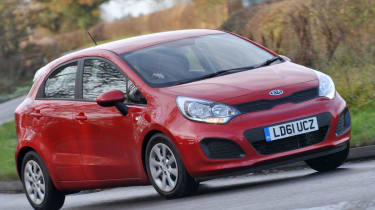 To make a non-hybrid car this efficient yet so uncompromised to drive is an impressive achievement, and there’s more to come. By 2015, Kia plans to reduce the weight of all its models by 10 per cent. And with other eco-technologies arriving all the time, it can’t be long before we see a 100mpg diesel hatchback. This excellent Rio has set the bar high – now it’s over to rivals to see what they can do.

According to Kia, petrol and diesel cars will continue to outsell hybrids and electric vehicles for at least the next two decades – but it’s not hanging around to find out if that’s true. The company now makes the world’s cleanest combustion-engined car: the Rio 1.1 CRDi EcoDynamics. And
we have driven it in the UK.
The on-paper figures are astonishing. With economy of 88.3mpg and only 85g/km of CO2 emissions, the Rio has stolen the eco crown from the 86g/km Smart ForTwo CDI. It even trumps the new 87g/km Ford Fiesta ECOnetic, which is due in mid-2012.
To achieve these super-low figures, the 1.1-litre three-cylinder diesel comes with longer gearing, stop-start, low-rolling-resistance tyres, a neat roof spoiler and a closed-off grille to improve aerodynamics.

There are a couple of ‘eco-rules’, too. The Rio must be ordered in base-level 1 spec, without air-conditioning. Add air-con, for £800, and the economy and emissions rise to 78.5mpg and 94g/km. Still, the entry-spec car comes with a CD player, iPod connection and central locking as standard – expensive treats in years gone by.
What’s remarkable about this model is that it drives like any other supermini powered by a small diesel. The long gearing means it’s easy to catch the engine off-boost, but keep your right foot pinned down and the swell of acceleration is better than the 14.9-second 0-62mph time suggests. The engine is reasonably smooth, although a faint rattle is emitted from under the bonnet.
The very light steering is geared to react quickly, which adds fun in bends. Thick-walled steel wheels give a firm but compliant ride, while the manual gearshift is precise.
Our only major reservation is the price. At £11,895, the Rio 1.1 CRDi EcoDynamics is £400 more than a base-spec Fiesta 1.4 TDCi with similar power. But while the Ford is undoubtedly more engaging to drive, the Kia comes with more kit and trumps the Fiesta’s economy by a staggering 19.4mpg.
Share this on TwitterShare this on FacebookEmail