The luxury Lexus flagship returns better than ever, but can the LS finally eclipse the A8, S-Class and 7 Series? 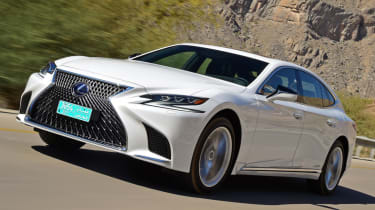 In isolation, the LS 500h marks a significant step forward for Lexus’s flagship. It’s oozing with technology and driver assistance features, there are some stunning intricate design touches, and on the strength of this drive, the cabin feels even more beautifully screwed together than ever. But while the petrol-electric system might seem like the perfect powertrain for current trends, in reality its drive is still badly compromised in too many situations for us to recommend it over mainstream diesel alternatives. People after a left-field option will find plenty to like in the LS, just because of its different approach. But in this case, we struggle to get beyond the fact that their cash would buy a wider range of abilities with the latest S-Class or A8.

It’s almost 30 years since the first Lexus LS arrived on the scene, offering a Japanese take on what a luxury car and, almost as importantly, a premium customer experience should be. But for all its astonishing sophistication and phenomenal build quality, the model has always been a curious alternative to the established (German) names in the luxury limo market: the Audi A8, BMW 7 Series and, of course, the Mercedes S-Class.

Lexus is hoping that the fifth generation of the LS can make more of an impact in the sector - helped, no doubt, by the current backlash against diesel and the ever-increasing likelihood of restrictions on driving around cities on anything but electric power. It hasn’t pulled any punches in its efforts to land a proper blow on the usual suspects, either, with an all-new platform (a lengthened version of the set-up from the LC luxury GT) and a heavily revised hybrid system.

It’s probably worth pointing out that there is a twin-turbocharged petrol LS - indeed, we drove it in Los Angeles earlier this month - but as before, it won’t be an option for UK buyers. Instead we’ll be offered what looks like a pared-back range, because the old choice between regular and long-wheelbase variants has gone. There’s now just a single size of LS on offer, although its wheelbase stretches a full 35mm longer than the old long-wheelbase variant, so accommodation shouldn’t be an issue. 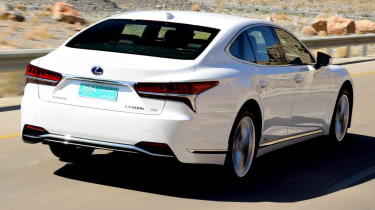 There will be a choice of transmissions, though, because as before, this LS is being offered with four-wheel drive as an option in the middle of the range (it’s standard on high-end editions, too).

First, the powertrain. The LS 500h hybrid mixes a 295bhp 3.5-litre V6 petrol engine with a pair of electric motors, giving a combined output of 354bhp - enough for a claimed 0-62mph time for the four-wheel-drive model of 5.4 seconds, even with a ludicrously complex four-step transmission that mimics a 10-speed unit.

The efficiency figures are respectable, but not stellar. An all-wheel-drive LS 500h manages combined economy of 39.7mpg and CO2 emissions of 161g/km - while Audi’s latest A8 manages 145g/km in four-wheel-drive 3.0-litre diesel specification. The rear-drive LS gets closer, though, emitting 147g/km.

Lexus is offering four trim levels on its flagship in the UK. The ‘entry-level’ LS 500h gets 20-inch alloys, triple-LED headlights, sat-nav, 20-way power adjustment on the front seats, dual-zone climate control and a 12-speaker stereo. This version is available in rear-wheel drive only, and you can’t order it with air suspension; it’s steel springs or nothing.

Step up to Luxury - offered with air suspension as standard, and a choice of rear- or four-wheel drive - and you add heating and ventilation on the front and rear seats along with a 23-speaker Mark Levinson audio system. You also get a finer grade of leather upholstery and even more adjustability on the front seats - plus something called Climate Concierge, which uses infra-red technology to monitor the body temperatures of all of the car’s occupants and adjusts its settings to take into account factors like sunlight shining into one side of the cabin. 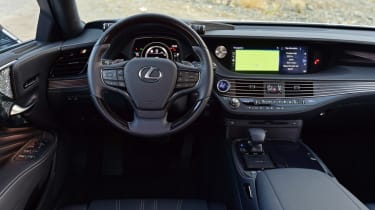 As its name suggests, F-Sport brings motorsport-themed styling and cabin tweaks, including perforated leather on the steering wheel, a fresh interpretation of Lexus’s ‘spindle front grille’, gloss-black detailing on the side skirts and bootlid, and a different design of 20-inch alloys. This version (rear-drive only) also gets greater integration of the car’s steering into Lexus’s Dynamics Integrated Management, with control of the variable ratio steering and the rear-wheel steering.

The range-topper, Premier, is available only with four-wheel drive in the UK - but Lexus expects it to account for as much as 45 percent of sales anyway. As you’d expect, it piles on the standard equipment, bringing Shiatsu massage functionality to the front and rear passengers, plus a spectacular ottoman function for one of the rear seats. This lowers the front passenger seat headrest and smoothly moves the seat out of the way, freeing up over a metre of legroom for one lucky occupant.

Premier models also get Lexus’s latest suite of safety features, called Lexus Safety System+A. These include the ability to keep the car in its lane while you keep a feather-light touch on the steering wheel, and to switch between lanes if you hold the indicator in its ‘halfway down’ position.

There’s also a more sophisticated pedestrian avoidance system that can swerve and brake to avoid a collision, plus a reversing monitor that can tell the difference between pedestrians and static objects and intervene if it thinks you’re going to hit someone.

Lexus is being pretty punchy on pricing. Assuming you want four-wheel drive, an LS 500h Luxury AWD will set you back £82,595. That’s a full £13k up on the list price of the aforementioned A8, which will only move further ahead on costs should its cheaper BIK rate be taken into account. Then again, Lexus is claiming extremely strong residuals of 53% after three years so this should be reflected in stronger monthly leasing rates.

One thing Lexus won’t be doing is chasing the chauffeur market with hefty discounts. The firm has an extremely modest target of 100 LS sales in the UK in 2018 (it has 34 reservations already), and is determined it won’t erode resale values by taking a route-one approach to chasing the four-figure sales of some of its rivals.

On the road, the Lexus’s dynamic make-up falls, as has so often been the case, somewhere between the outright comfort of the S-Class and the taughter body control of the Audi A8 and BMW 7 Series. Our test car was a four-wheel-drive Premier, and the air suspension did a reasonable job of soothing out most of the bumps there were on the soothingly smooth roads of Lexus’s test route in Oman.

The system isn’t infallible, though, and it allowed the worst and sharpest imperfections to jar through to the cabin; this could be more of a factor in the pock-marked streets of British cities, we suspect.

This wouldn’t matter so much, of course, if the LS felt light on its feet - in the same way that the A8 undoubtedly trades off a bit of overall comfort for an unusual level of dynamic prowess. But the LS still manages to deliver a fair amount of body roll in corners; in fact, it feels all of its 2.4 tonnes if you try to throw it around, and never shrinks around you in the same way as the Audi. The steering is light and inert, too, making it hard to feel any real sense of connection with what’s going on beneath you.

This preference for gentle straight-line cruising extends to the powertrain too, really, because while you can hustle the LS along at a reasonable lick, it puts up a bit of a protest. The petrol engine lacks any turbocharging and produces a very modest 350Nm of torque - miles short of the diesels in many of this car’s rivals, and pretty poor in comparison with the LS’s own pleasing twin-turbo V6 petrol that we tried in Los Angeles recently. 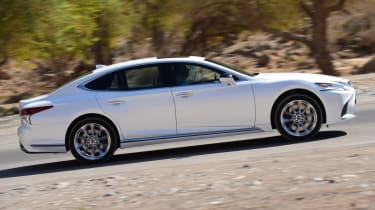 The Lexus hybrid relies, therefore, on the electric motor to help it along. And while the system is another step on from what we’ve seen before, it still has enough complexity to trip over its own feet from time-to-time.

In the most part, refinement is strong; helped by active noise cancelling tech, the engine’s note falls away at a cruise, leaving only some wind rush from the A-pillars to intrude at higher speeds. And providing you’re willing to accept smooth and steady acceleration, it’ll get around town with a little bit of electric motor hum and polite interruptions from the combustion engine. In this respect, the LS does feel like a good limo for town use.

On the open road, however, things start to deteriorate if you’re in a genuine hurry and start to press heavily on the right-hand pedal. The latest LS’s four-step transmission has false ‘ratios’ and it does its best to jump around them to keep things in check.

But while the system is a big improvement over the old CVT’s configuration, there are still too many times when your desire for acceleration will outweigh the LS’s ability to deliver it in a civilised fashion. And when that happens, you get a soaring drone from the V6 and the sense of refinement is shattered.

Should you wish to make your LS more sporty - and we can’t quite understand why you’d want to do this - you can flick to a different mode that offers a smidgen of extra body control and improves the hybrid system’s response to throttle inputs. It also allows a bit more of the engine’s note through to the cabin - but it sounds quite contrived, almost to the point of seeming artificial, and it’s accompanied by even more electric motor whine. 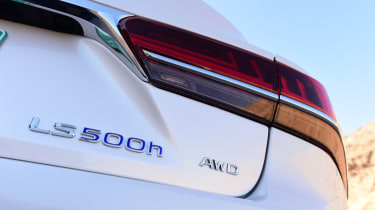 The latest safety and driver assistance features are a far more effective (and meaningful) tool in the LS’s box of tricks. The mixture of adaptive cruise and lane keep assist works remarkably well, and it does an excellent job of making fast motorway cruising a relaxing experience.

Inside, Lexus has introduced plenty of Japanese craftwork in a bid to make the LS stand out from the ever-so-conservative Germans. There are some exquisite touches, and you can ramp things up further by speccing inserts inspired by cut glass, and hand-pleated fabric in the door panels (they’re a £7,600 option). But we’ll leave you to make your own mind up on the aesthetic appeal of so many individual details being squeezed into one cabin.

We will give a view on the infotainment system, though, which is an improvement for Lexus but still some way off the standards being set elsewhere in the industry. The enormous head-up display deserves credit, for clarity and the amount of information it can relay. But even if you do get accustomed to the fiddly touchpad operation of the infotainment set-up, it’s ludicrous that neither Apple CarPlay nor Android Auto is offered, even as an option.

There are fewer complaints about the cabin accommodation in general - particularly in the rear, where the extensive range of seat adjustment and massage functionality offered on Premier models is enough to keep the most fickle of passengers entertained, and in comfort.

The boot capacity is only fair, though, at 430 litres; that’s some way shy of the amount of space offered by the S-Class, 7 Series and A8. And it’s even trumped by the boot of Jaguar’s ageing XJ.